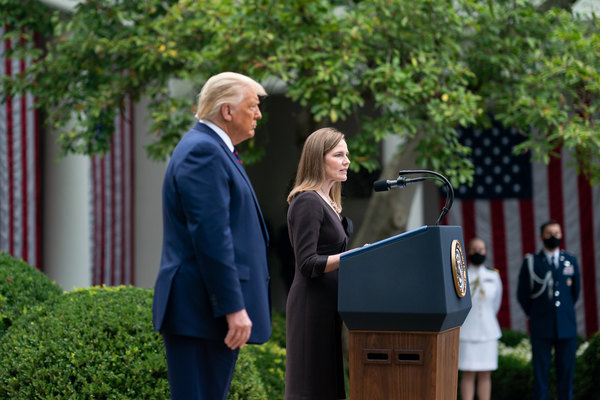 Liberty-loving Americans are disgusted by the attempts of some D.C. politicians to derail the proceedings, but they're hopeful Barrett will be a stalwart defender of freedom and limited government.

Unfortunately, if history is any indication, that hope may be misplaced. Previous judges nominated by Republicans have expanded the power of the federal state and infringed on the rights of state residents to govern themselves.

Chief Justice John Roberts stabbed citizens in the back on Obamacare. This most recent term saw the court take a dig at our religious liberties and block Trump’s war on illegal immigration.

Even as we hope that Barrett won't follow Roberts' lead, we can't take our eye off the ball -- we need to reduce the power of the federal government as a whole, including the Supreme Court.

There are plenty of ideas worth researching on how to check the U.S. Supreme Court’s power. At one time, conservative commentator and lawyer Mark Levin suggested amending the U.S. Constitution so future Supreme Court decisions could be overridden by a supermajority of state legislatures.

Alliance Defending Freedom CEO Michael Farris once suggested the court be reformed to have 50 justices—one from each state. Each state could decide how to pick their judge (having a popular election, having their legislature make the decision, or having their governor make the nomination).

Each state could also reserve the power to recall their appointed justice if he or she didn’t rule in the manner they originally claimed they would. This would make judges more accountable to the states and the people—not Washington D.C.

These are just two of the ideas that could be proposed at a Convention of States. There are others, but any and all proposals would have to be approved by 38 states. This would ensure only the best, most popular ideas become part of the Constitution.

Congress will never vote to limit the power of the Supreme Court, of course. The "court packing" schemes proposed by Senator Schumer and others would do nothing but delegitimize our nation's highest court. They would turn the court into an overtly political body and destroy all trust in their impartiality.

The only way to truly reform the Court -- to ensure that the people and the states maintain the right to self-governance -- is via an Article V Convention of States. A Convention of States can propose constitutional amendments that provide real checks on the Court's power and put We the People back in control of our country's future.

Millions have joined the movement, and 15 of the necessary 34 states are on board. Join this historic grassroots effort by signing the petition below!