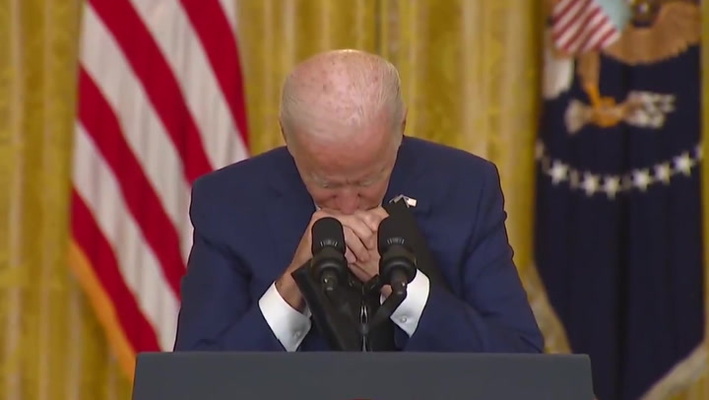 The tragedy in Afghanistan is the direct result of policies pursued and maintained by President Joe Biden. Those 13 American soldiers and over 90 Afghan civilians would still be alive today if it hadn't been for President Biden, and Convention of States Action President Mark Meckler is tired of avoiding that basic fact.

In a scathing editorial published in Newsmax, Meckler called out the president for what he's done.

It’s difficult to look evil in the face.

It’s difficult to watch the scenes of horror and confusion around Kabul airport in Afghanistan.

Now, we’ve witnessed at least a dozen or more American service members killed in heinous, cowardly terrorist attacks that everyone knew would come eventually. At least 60 Afghans have been killed as well, and untold numbers wounded.

The Taliban are truly evil, and if that’s the case, those who aid and abet them are evil as well.

Which brings me to President Joe Biden.

When I look at the President and his administration, I see a man who has lied and continues to lie about the worst foreign policy disaster of the last 40 years. I see a man who has abandoned Americans and allies alike and refuses to take responsibility for the pain and suffering he has caused.

What he’s done and continues to do is more than misguided: It’s evil.

If you doubt the truth of this claim, Mark runs through example after example of how Biden's Afghanistan policies have hurt, injured, killed, and endangered both American citizens and the people of Afghanistan.

Babies in razor wire, women subjugated, Afghans murdered, Christians hunted, and now American soldiers killed are just the tip of the iceberg. Mark concludes like this:

As we watch in horror the news that dozens of American service members have died, remember this: Joe Biden knowingly caused this disaster. And he doesn’t give a damn.

According to him, none of this was a mistake, and this was to be expected.

I look at Biden and his administration, and I see evil, right here in America. We should name it, proclaim it, and fight it.

That fight begins with electing better leaders, but it must end with an Article V Convention of States.

Only a Convention of States has the power to propose constitutional amendments that limit federal power and spending, and mandate term limits for federal officials.

President Biden is clearly unfit for office. He's been in Washington longer than most Americans have been alive, and he appears incapable of handling the crisis in Afghanistan.

If the states had already called a Convention, proposed a term limits amendment, and ratified that amendment, politicians like Biden would be long gone. A Convention could also propose amendments that reduce federal power and limit their spending, which would ensure that incompetent politicians had less power and money to ruin our country and risk American lives.

To join the movement that boasts 5 million supporters and 15 state legislatures, sign the petition below.