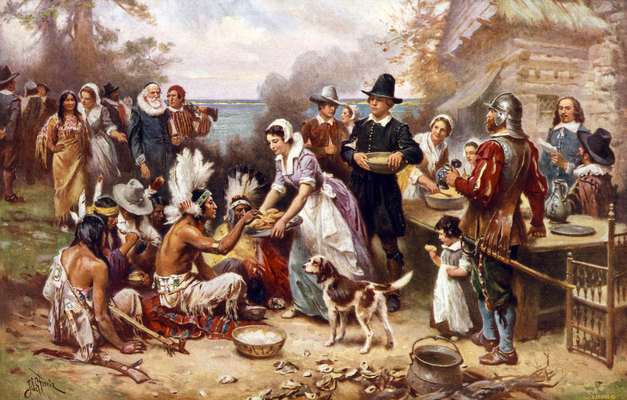 Since the first Thanksgiving was celebrated 401 years ago, the distinctly American celebration has become a beloved hallmark of the holiday season. This year, between tumultuous politics, inflation, and other economic woes, many Americans may find themselves counting nickels and dimes rather than counting their blessings.

Courtesy of our floundering economy, the price of a traditional Thanksgiving dinner is up 20% this year. In fact, this year’s highest average cost is the highest on record.

But as families across America tighten their belts and brace for a pricey Thanksgiving and Christmas season, we must remember just how blessed we are to live in the United States. Even when money is tight, we still are the richest nation in the world.

Also, an overview of history reveals that Thanksgiving was born out of – and is often most poignant in – times of adversity.

When the Pilgrims crossed the pond in 1620, they had no idea just how dark and trying their future would be. They also could not have imagined how blessed the world would be for generations to come because of their courage and endurance. Their yearning to worship God as they saw fit led them from the comforts of home to the perils of the undeveloped New World – and history was forever changed.

Arriving in November, they were met with a brutal New England winter that wiped out half of the original 102 Mayflower passengers. The Pilgrims were ill-prepared to survive in the wild, and the winter, with its accompanying diseases, showed no mercy. But hope was just around the corner.

Spring arrived with a stroke of luck – or providential intervention: a welcome visit from a member of the local Native American tribe. Squanto, to the Pilgrim’s astonishment, spoke English. He taught the malnourished newcomers how to hunt, grow food, and catch fish, and without his capable guidance, they almost certainly would have perished. He was, to them, a godsend.

To celebrate their first successful harvest season, the colonists’ governor, William Bradford, called for a three-day feast of thanksgiving with Squanto and his fellow Native Americans. Only one year prior, the early American heroes had been on the brink of extinction. Now, they enjoyed fowl, deer, an assortment of fruits and vegetables, seafood, and a close friendship with the Indians.

And thanks to Squanto, they were prepared for the coming winter.

Truly, they were grateful to God for their fortunate turn of events. They had surmounted impossible difficulty and loss, and their deep-seated zeal for religious liberty would take root in the soil of the future United States of America. “And although it be not always so plentiful as it was at this time with us,” one Pilgrim wrote, “yet by the goodness of God, we are so far from want.”

Throughout history, many U.S. presidents have recognized the importance of national thanksgiving. George Washington was the first president to issue a national Thanksgiving proclamation in which he said, “it is the duty of all nations to acknowledge the providence of Almighty God, to obey His will, to be grateful for His benefits, and humbly to implore His protection and favor.

Later, Abraham Lincoln urged the nation to hold fast to thanksgiving even in the midst of a bloody civil war.

“It has pleased Almighty God,” Lincoln wrote in an 1864 proclamation, “to prolong our national life another year, defending us with His guardian care against unfriendly designs from abroad and vouchsafing to us in His mercy many and signal victories over the enemy, who is of our own household. It has also pleased our Heavenly Father to favor as well our citizens in their homes as our soldiers in their camps and our sailors on the rivers and seas with unusual health. He has largely augmented our free population by emancipation and by immigration, while He has opened to us new sources of wealth and has crowned the labor of our workingmen in every department of industry with abundant rewards. Moreover, He has been pleased to animate and inspire our minds and hearts with fortitude, courage, and resolution sufficient for the great trial of civil war into which we have been brought by our adherence as a nation to the cause of freedom and humanity, and to afford to us reasonable hopes of an ultimate and happy deliverance from all our dangers and afflictions:

Now, therefore, I, Abraham Lincoln, President of the United States, do hereby appoint and set apart the last Thursday in November next as a day which I desire to be observed by all my fellow-citizens, wherever they may then be, as a day of thanksgiving and praise to Almighty God, the beneficent Creator and Ruler of the Universe. And I do further recommend to my fellow-citizens aforesaid that on that occasion they do reverently humble themselves in the dust and from thence offer up penitent and fervent prayers and supplications to the Great Disposer of Events for a return of the inestimable blessings of peace, union, and harmony throughout the land which it has pleased Him to assign as a dwelling place for ourselves and for our posterity throughout all generations.”

From the Pilgrims at the first Thanksgiving to Washington and Lincoln, Americans believed that even in pressing times, we, as citizens of the United States and children of God, still have something to be thankful for. No matter our circumstance, setting aside the time to count our blessings will keep us from losing hope.

The same is true today, of course. Whether in victory or loss, we all have much to give thanks for. And as President John F. Kennedy reminded us, “we must never forget that the highest appreciation is not to utter words but to live by them.”