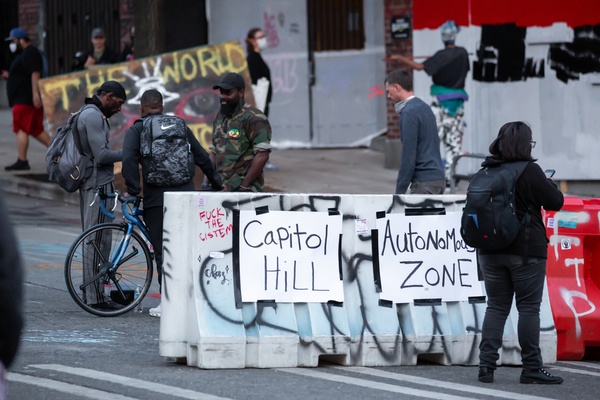 You may have seen news coverage of Seattle's Capital Hill Organized Protest Zone (CHOP) lauding the cooperation and humanity of the zone's residents. Despite the recent murder in the zone, activists and journalists alike have described the protesters as the pinnacle of socialist freedom fighters.

This tweet, for example, shows the gardens and chicken coops supposedly springing up in downtown Seattle:

Just got tested for COVID-19 downtown and swung by #CHOP #CHAZ to check out the campers.

And this article from The Guardian describes the CHOP as just the latest in a long line of righteous protests:

The streets of the self-proclaimed police-free zone are now lined with gardens, a medic station, a wide array of free food and supplies, a meditation station and an area filled with couches called the “Decolonization Conversation Café”. In the evenings, there are often speeches, movie nights and teach-ins.

Depending on where you get your news, you might believe that downtown Seattle is a socialist utopia come to life, complete with free food, free healthcare, and free education.

There's just one problem: it's all a lie.

There may be free food, movies, and a meditation station. But the residents of CHOP are building their "utopia" on the infrastructure -- the roads, water, and buildings -- paid for by the free market. Seattle's government may have built the roads, but those roads were funded by taxpayer dollars.

And the wood to build those gardens and chicken coops? We have a feeling the CHOP residents haven't cut down any trees.

How about the projectors they use to screen movies? Invented, manufactured, and shipped by private companies.

In a real socialist country, tyrants at the top of government get rich while everyone else works for the state. Freedom and self-governance are out of the question. Every citizen works for the good of the collective, and there's no opportunity for advancement.

If CHOP has seen any success, it's because they're standing on the shoulders of giants. They're taking advantage of the free market's prosperity to promote ideas that will destroy that freedom.

With socialism on the rise across the country, we must build constitutional firewalls against a big-government takeover. Washington is too inefficient and distracted to address this issue, which is why We the People must step in.

An Article V Convention of States is called and controlled by the states and has the power to propose constitutional amendments. These amendments can end the threat of socialism by limiting the number of things on which Congress can legislate.

Right now, the feds can pass laws on everything from healthcare to education to the environment. With a Convention of States, those decisions can be left up to the people and the real communities where they live.

Millions have joined the effort and 15 states are on board. Sign the Convention of States Petition below to show your support and take a stand against socialism!