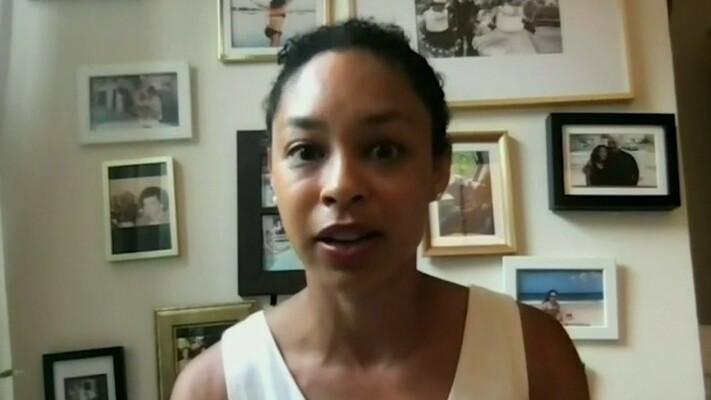 Mara Gay doesn't like the American flag. The New York Times editor and MSNBC commentator described this week how "disturbing" it was to see pickup trucks waving "dozens of American flags."

Here's what she said:

“The reality is that we have a large percentage of the American population… tens of millions of Trump voters who continue to believe that their rights as citizens are under threat by simple virtue of having to share the democracy with others. As long as they see American-ness as one with whiteness, this is going to continue.”

“I was on Long Island this weekend… and I was really disturbed. I saw dozens and dozens of pickup trucks with explicitives [sic] against Joe Biden on the back of them, Trump flags, and in some cases, dozens of American flags, which is also just disturbing. Because essentially the message was clear: this is my country. This is not your country. I own this.”

Her comments are obviously racist, and she assumes the millions of Trump voters (many of whom are not white) don't like "sharing democracy" with non-white Americans. But that's not the most disturbing part.

Gay's comments align with a radical ideology common in our country today that seeks to tear down everything that has made this nation great. She's "disturbed" by the American flag because she believes it represents racism, bigotry, and oppression. Rather than acknowledge that our country was founded on freedom and self-governance--and that we've continually progressed to allow more Americans to participate in those ideals--she believes our country is irredeemably flawed. The flag "disturbs" her because she's dedicated to seeing only the bad in our country's history, and she wants to tear down our institutions and start over.

Radicals have always existed among the "elite" in our country, and we firmly believe that Gay has the right to say whatever she wants on cable news. But her radicalism isn't relegated to MSNBC.

The Biden administration announced recently its intention to promote "critical race theory" in American schools and indoctrinate our children with the same ideologies that Gay believes. If this happens, an entire generation will grow up believing that their country is shot-through with racism, and they'll have little incentive to defend the principles of liberty on which our country was built.

A Convention of States can't control what journalists say on TV, but it can control what the federal government does. Article V allows the states to call a Convention to propose constitutional amendments that limit the power, scope, and jurisdiction of the federal government. These amendments can clarify that Washington should play a much more limited role in our nation's education system, and put those decisions back in the hands of the states and local communities.

Local anti-American curriculums are much easier to fight than a federal program, and even if they're successful, parents have the option to move to a school district that teaches real American history.

The Mara Gay's of the world shouldn't be in charge of our children's education. If we call and convene a Convention of States to rein in federal power, they never will be.