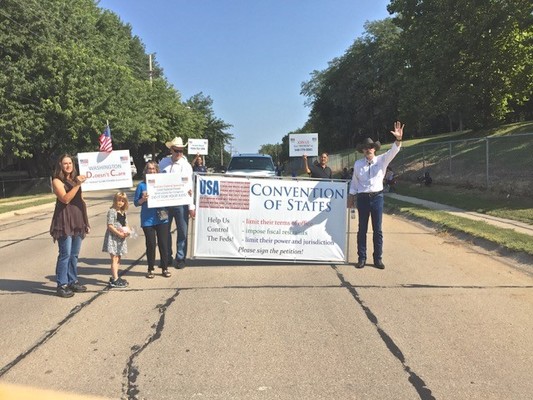 The Government, Military, and Veterans Affairs Committee of the Nebraska legislature listened to testimony today about Article V of the Constitution and how to prepare Nebraska  commissioners for a convention that becomes more likely every day.

Senator Laura Ebke of Crete, introduced the legislative resolution earlier in the year to begin the process of studying how the state of Nebraska will select delegates, the scope of authority of delegates, oversight procedures, and fines or penalities if a commissioner violates their commission.

The Government, Military, and Veterans Affairs Committee is required to submit a report to the Legislature (or Legislative Council), Governor, Attorney General, and Secretary of State accourding to Legislative Resolution 181 (LR181).

Eric Berger, University of Nebraska Lincoln (UNL) Professor of Law and Assistant Dean of Faculty, testified against a "constitutional convention." Robert, Steve, and Jim crushed all of Professor Berger's standard opposition arguments by laying out the legal and historical facts of Article V.

Jim McGinnis corrected the record by referring to the Philadelphia Convention as the proper name for the meeting of the states to write the convention. Sadly UNL has another case of a professor attempting to pass off incorrect information and opinion as fact solely on academic credentials.

The Convention of States Nebraska team looks forward to revieing the final report produced by the Government, Military, and Veterans Affairs Committee and continuing to advocate for Article V.