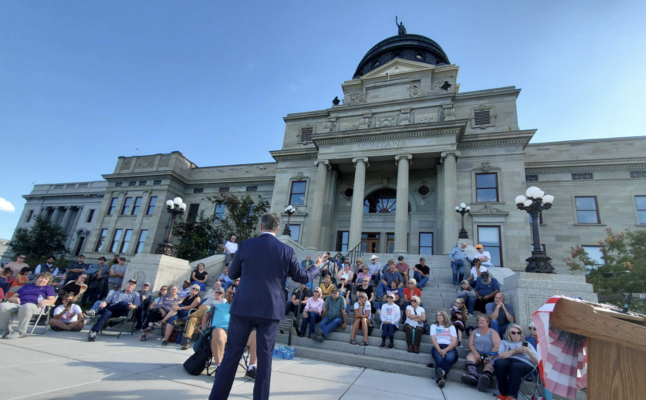 Montanans' fervent support for a Convention of States was evident to all on Wednesday in the Helena state legislature and to those watching online.

The Montana Senate Committee on Business, Labor, and Economic Affairs recently introduced the Convention of States Resolution – known as Senate Joint Resolution 2. The committee listened to hours of testimony from supporters during a Wednesday hearing.

"We are less free and less prosperous because a nanny state will not allow us to make our own decisions and live our own lives," said one Convention of States proponent. "If not now, then when? When do we finally acknowledge enough is enough and agree to utilize the measure granted to us by the Founding Fathers in Article V of the Constitution?"

Dozens of brave and steadfast patriots advocating for an Article V convention not only attended the hearing but also took to the stand to speak the truth boldly. Their clear and inspiring words sent a message to legislators that Montanans are dedicated to America's prosperity.

"You have been given the power in the Constitution under Article V to control the federal government. That's your power," said former Senator and COS Senior Advisor Rick Santorum. "You are at the bottom of the foot of the food chain right now. But that's not where you belong. That's not where the Congress put you. They put you at the top of the food chain. Article V is your power. And if you don't use it and this country fails, it's on you."

One empowering woman gave a startling example of what true leadership looks like. She explained that her granddaughters work at Taco Bell for $16 per hour, while those working for the state make as little as $13 per hour. She marveled at the fact that the Montana legislature is financially responsible and careful in how it may raise wages.

"Each of you is what Congress was intended to be – servant leaders. None of you are going to become multimillionaires by serving the Montana legislature, no. Nor will this become a lifelong career for you."

She added that because of responsible state leaders, Montana has a surplus of funds, unlike the federal government with a $31 trillion debt. "I believe it is long past time to force Congress to operate more like the Montana legislature."

Currently, 19 of the constitutionally-required 34 states have passed the COS Resolution and 20 states are expected to consider the Resolution this year. If you're just learning about Convention of States for the first time, please sign the petition below to show your support for the Montana team and all the state teams working hard to get to a convention.

See how you can get involved here and watch the full hearing here.