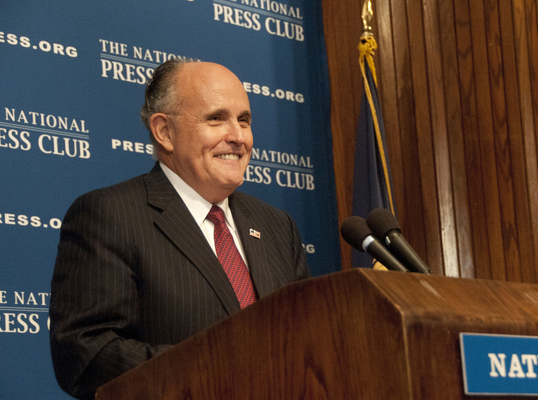 Former New York City Mayor Rudy Giuliani is the latest high-profile American to give deep consideration for an Article V Convention of States amidst an overreaching and far too powerful federal government.

During a 4th of July live airing of his podcast Common Sense, Guiliani took a call from listener Gary Brenner, the Convention of States Action National Grassroots Media Director.

Brenner explained that the Republic is in deep trouble and the only way to save it is through the Constitution. Guiliani listened to the pitch for an Article V convention to propose amendments, and responded with great openness to the possible solution to an abusive federal government.

“I certainly don’t have a closed mind to it and would like to hear a lot more about it. There’s no question we’ve got to do something to save our country, and maybe this is it. Let me take a look at it,” Guiliani said on air.

Brenner, who works directly with the thousands of grassroots volunteers across the country, added:

“The bottom line is, this is a process driven by the people which is what the Framers actually said over and over again...Over five million Americans support this movement and they are working it actively as activists in this Convention of States movement in every state legislative district in this nation.”

Guiliani expressed some concern over a possible runaway convention in which progressive ideas could take over the Constitution and destroy the future of America.

“My concern is, they [Democrats] would get control of it, and we could end up with a one party dictatorship, which is what they want.”

This common misconception among people not particularly familiar with the subject is easily debunked, based on the fact that an overwhelming majority of the states (38) would need to ratify any proposed amendment. This would require a sweeping amount of Democrat and Republican states to agree on any such changes.

Further, only topics relating to three areas of discussion would be up for consideration: term limits, fiscal restraints and an overall limitation to the federal government's size and power.

“I will certainly give it a lot more thought,” added Guiliani.

That’s a success for the Convention of States movement and the grassroots, who work tirelessly each day to spread the message far and wide among left and right-wing groups. The first step in the COS Project is informing the public, which requires diligence and commitment at every level.

Let us know you support the Convention of States Project by signing the petition below!