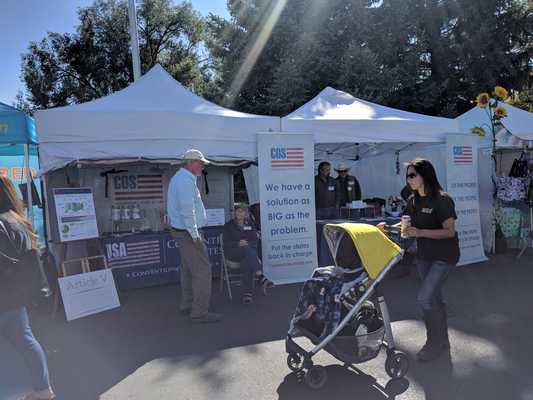 The following was written by Convention of States Colorado leader Barb Stoermer.

Cedaredge is a quaint town on the Western Slope of Colorado. Not many (and we try to keep it that way) know that the largest flattop volcano in America (known as the Grand Mesa) surrounds the community.

For 112 years our town has been centered on Main Street where the single stop light is enough to manage a tiny population of 2200, the local hardware store employee knows your dog's name, and everyone turns out for the fire department's annual chili fundraiser.

We affectionately call our town "Cedarberry," for it embodies everything  "Mayberry." This was the fictional town of America's favorite television show in 1968, and it was the essence of small town America.

The Cedaredge apple orchards in the valley are passed down through generations of families. Rich ancient volcanic soil feeds the roots of the noble apple trees and produces one of the finest Honeycrisp apples in the world.

Forty-two years ago, the community of Cedaredge opened up its Main Street to local vendors who wanted to sell apples, apple pies, apple cider, caramel apples, applesauce, apple jelly, apple fritters, or just about anything related to apples.

People came from all over the valley to buy their apples for holiday pies and to store for the long winter months. They knew what apple-lover Benjamin Franklin recommended in the 18th century: "An apple a day keeps the doctor away."

This year, on a perfectly pristine Fall day, approximately 30,000 apple-lovers came to Main Street to taste the apples, stock up for the winter, and soak in all the traditions we hold dear in America.

The Colorado Convention of States Western Slope team knew the Americana setting would be very ripe for sharing information about Article V,  our grassroots movement, and achieving the lofty goal of 200 or more petitions signed.

When 30,000 people are coming down the street, trust me, the size of your booth matters! The smell of fresh popped kettle corn filled the air, baskets of Honey crisp apples begged to go home with you, beautiful arts and crafts vied for attention, and a foot race to the hard cider booth are selling challenges for any vendor.

So, we went big this year...real big! Two booths would be required. Fortunately, it helps when the Applefest organizer is a COS supporter. Our COS friend not only gave us a price break on the booth fees, she gave us a prime Main Street location.

We added lots of visuals about Article V, COS, and a Kid's History Challenge game to bring the folks to the booth. The strategies paid off.

Hundreds of festival goers stopped dead in their stroll when they saw the COS signs. Many would cock their head and ask a volunteer, "What the heck is Article V? Who are you? Why are you doing this?"

Many of them, were not aware of the second clause of Article V. Like many of our COS supporters it was one of those "constitutional light bulb" moments and seconds later, they said, "Sign me up!"

During the two day event, over 200 patriots signed the petition to invoke Article V of the U.S. Constitution and call for a convention to propose amendments to the Constitution. The most popular amendment among the petition signers was to impose term limits on Congress and federal officials.

Colorado's Western Slope citizens definitely wanted their voices to be heard, and they conveyed that to the Colorado state legislature through our Article V petition. They believe in self-governance and understand America is a republic, not a democracy.

In September 1787, on another quaint Main Street of America, Benjamin Franklin left the Independence Hall in Philadelphia at the close of the Constitutional Convention when he was approached by a woman who asked Dr. Franklin "Well, Doctor, what have we got--a republic or a monarchy?"

"A republic," he replied, "if you can keep it." It was then that the seeds of our constitutional republic were planted in the fertile minds of an independent people.