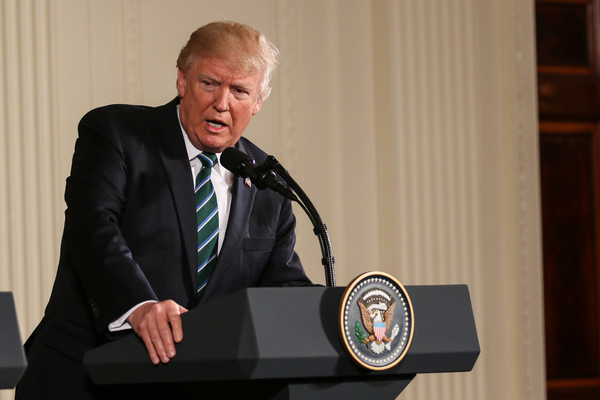 The following was written by Convention of States Action President Mark Meckler and originally published on SelfGovern.com.

When President Donald Trump was a candidate, he told Sean Hannity that balancing the budget should be pretty easy:

“It can be done. … It will take place and it will go relatively quickly. … If you have the right people, like, in the agencies and the various people that do the balancing … you can cut the numbers by two pennies and three pennies and balance a budget quickly and have a stronger and better country.”

But after his election, he no longer seemed as concerned about balancing the budget.

To be sure, he has overseen economic successes.  This week, the Labor Department released January monthly payroll figures which were way beyond expectations.

“I am thrilled to report to you tonight that our economy is the best it has ever been,” President Trump said in his State of the Union address Tuesday night.

But even though the economy is doing well, our leaders are still defending the rapid deficit expansion CNBC reports on what Vice President Pence said about the White House’s strategy.

“The president came into office and he said, ‘First and foremost, we have to restore growth,’” Pence said. “Deficits and debt are right in line, but it is first about getting this economy moving again and we really do believe the trajectory of this economy.”

In other words, they are pushing this down the items of urgency until the economy is better…. Even though this are going very well under Trump, the deficit is growing at Obama-like speed:

Under Trump, U.S. budget deficits have grown at a level not seen since the middle of the Obama administration, when the government was working to pull the country out of the Great Recession. The fiscal deficit topped $1 trillion in 2019, the highest level in a calendar year seen since 2012, according to Treasury Department figures released last month.

Asked about the debt-to-GDP ratio — which has grown from Obama’s tenure in the White House to Trump’s — Pence said Friday that “in a second term, we’ll continue to address those issues.”

But Trump’s belief, Pence added, is that “the real long-term solution to the fiscal challenges in Washington, D.C., is making sure the budget of every American is growing.”

“Once we get this economy rolling,” he added, “we’re going to work real hard, not just to get President Donald Trump four more years in the White House, but we’re going to make sure we have a Republican Senate and a Republican House to keep America growing and to deal with those long-term fiscal challenges.”

I’ve never considered my concern for fiscal conservatism as bogus. I seem to write about this every few months, and I feel like a voice calling out in the wilderness.  Last summer, something revealing happened on Rush Limbaugh’s radio program and absolutely no one noticed. He had a discussion with a caller that went like this:

CALLER: In 2019, there’s going to be a $1 trillion deficit. Trump doesn’t really care about that. He’s not really a fiscal conservative. We have to acknowledge that Trump has been cruelly used.

LIMBAUGH: Nobody is a fiscal conservative anymore. All this talk about concern for the deficit and the budget has been bogus for as long as it’s been around.

Rush was absolutely right, and it barely caused a stir.

CNN’s Chris Cillizza points out that our politicians will not pay a political price for all of this debt. “Less than 50% of people in a January Pew poll said that lowering the federal deficit should be a top priority of Washington policymakers. That’s down, rapidly, from 72% who said the same earlier this decade.”

Whether or not this is still a topic people want to talk about, it’s a problem that will not go away.

We can not abandon fiscal conservatism. In fact, it’s one of the main reasons why I support the Convention of States project. Article V allows the states to call a Convention of States for the purpose of proposing amendments that can make the feds do what they are supposed to do, but seem incapable of doing. Through a COS convention, “we the people” can pass amendments to curtail spending, keep taxation low, and balance the budget.

Soon – sooner than we think – our nation will have to deal with this out-of-control problem.

If our politicians won’t lead the way, we must.