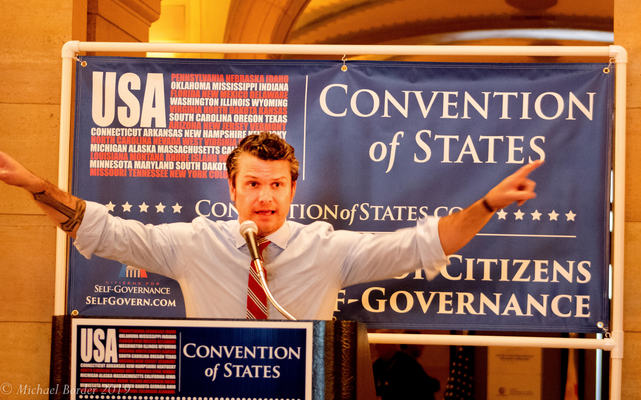 The following excerpt was written by Michael Border and originally published on Alpha News Minnesota.

The federal debt balloons to $22 Trillion and beyond. The federal government increasingly intrudes on state domains in bold power grabs. Unelected career bureaucrats and elected officials who have been ensconced in office for decades consistently fail to make meaningful headway on a to-do list of unresolved issues that grows longer and more costly each year.

Can concerned citizens do anything to help bring into check these formidable challenges?

Minnesota citizen Steve Davidson has found an answer considerately tucked into the Articles of the U.S. Constitution. The Founding Fathers foresaw the risk of a federal government taking excessive power unto itself at the expense of the states, Davidson explained. Lead by Colonel George Mason, the Framers unanimously adopted Article V of the U.S. Constitution to restore power to the people by giving the people and state legislatures the ability to modify distinct portions the standing Constitution in precise ways, he adds.

The convention of states serves as safety valve for citizens. It was deemed to be so important that it was unanimously ratified by the Founding Fathers.

It’s essential to recognize what the Convention of States IS NOT: It’s NOT a constitutional convention which would confer broad powers to rewrite or toss out the original Constitution. The convention of states mechanism cautiously confers citizens the ability to fine-tune the Constitution.

A Convention of States, in a defined, limited scope, empowers state legislatures or citizens groups to compel the U.S. Congress to set a time and place for such meeting of representatives from all states to be held to consider a finite set of issues that have been defined in the course of the process. Davidson said the term used by the Founders, “a convention for proposing amendments,” keeps the distinction clear. There’s a formula for achieving critical mass across a prescribed number of states.