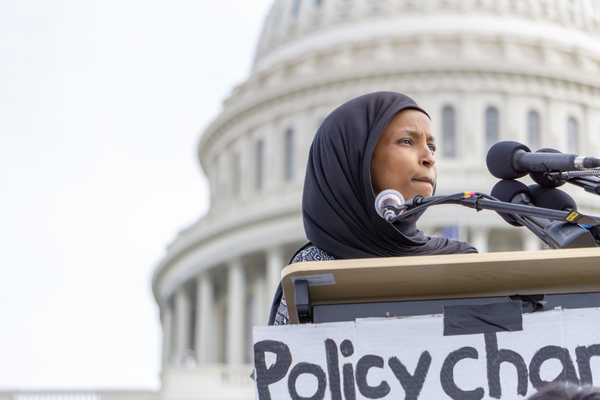 Congresswoman Ilhan Omar believes that Joe Biden owes his nomination to the progressive wing of the Democratic party, and she's ready to push him towards far-left policies like the Green New Deal and Medicare-for-all.

In an interview with Axios, she said that Biden should remember the help he as received from progressives and "act accordingly."

“A president is only as successful as his collaboration is with Congress and we will have a cohort of progressives that are very clear about their objectives for wanting the implementation of, you know, Medicare For All and a Green New Deal and raising the minimum wage and not allowing for fracking,” Omar said.

Omar said that Biden should fill “all of the cabinet positions” with progressive Democrats and claimed that the American people really want the policies espoused by Sen. Bernie Sanders (I-VT).

Medicare-for-all and the Green New Deal are mentioned so often that Americans might be forgiven for forgetting the real consequences of these policies.

Medicare-for-all will remove our ability to make decisions about our own healthcare. Rather than choose a doctor, specialist, or surgeon, Americans will be forced to visit government-funded doctors chosen by bureaucrats in D.C. or state offices. The policy will raise taxes, lower standards of care, and increase wait times across the country.

The Green New Deal is even worse. As envisioned by Rep. Alexandria Ocasio-Cortez, the GND will mandate a takeover of the entire country by the federal government. Bureaucrats in D.C. will control the energy industry, private businesses, housing, farming, and a host of other sectors. It will be nothing short of the socialist "utopia," and we all know how those "utopias" end up.

Americans shouldn't have to worry about a socialist takeover. We need a permanent solution to the threat posed by the federal government, and an Article V Convention of States can provide that solution.

A Convention of States is called and controlled by the states and has the power to propose constitutional amendments. These amendments can block the socialist agenda by limiting the power, scope, and jurisdiction of the federal government -- and returning that power to the states and the people. Amendments could include those that restrict the things on which the federal government can spend money, which would eliminate the threat of Medicare-for-all. Other amendments could restrict the scope of federal power to only those topics expressly mentioned, which would make the Green New Deal virtually impossible.

We can't rely on either party to make these permanent reforms our country so desperately needs. We must do it ourselves, and we can make it happen with a Convention of States.

It only takes 34 states to call a Convention, and already 15 states have passed the Convention of States Resolution. If you want to get in the fight in your state, sign the petition below!