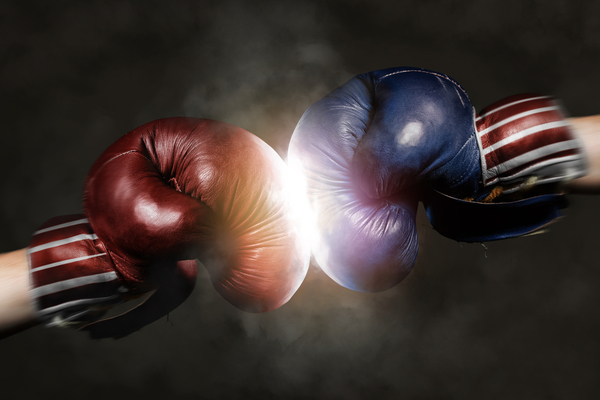 Both the Right and the Left are more alike than you might suspect.

I don’t mean we are alike in the clichéd, superficial way that politicians use cheap words and phrases like “nonpartisan” or “crossing the aisle.” In today’s political climate, despite what these politicians want you to think, coming together in unity is essentially a nonexistent practice. At best, it's a relic of what we’d like to think America once was. More than likely, it’s just wishful thinking.

The Right and Left are deeply polarized, and they always have been.

Nonetheless, we are still alike in many ways, but it is our bitter dissimilarity that highlights our sad similarities.

Both sides, for example, are convinced that we must take immediate action to save our country, but the Right says we must save it from communism (which it blames on the Left), and the Left hopes to save it from fascism (which it blames on the Right). Both sides utterly abhor sloppy journalism. One side calls it “fake news;” the other labels it “misinformation.” And while the Left has relentlessly accused Trump of authoritarianism, conservative commentator Ben Shapiro recently penned an entire book inculpating the Left of the same sin.

So, when I say that the Right and the Left are more alike than you might suspect, I mean they are alike in that they both recognize many of the same problems and both attribute those problems to the other side. And ever increasingly, as a result, Republicans hate Democrats and Democrats hate Republicans.

A 2019 poll from the Pew Research Center reported that “55% of Republicans say Democrats are “more immoral” when compared with other Americans,” and “47% of Democrats say the same about Republicans.” A similar Axios poll from a few months earlier indicated that more than 20% of both Democrats and Republicans would describe the other side as evil.

More specific details from Axios revealed that 61% of Democrats considered the GOP to be "racist/bigoted/sexist," while the Pew poll found a similar number of Republicans thought Democrats were disproportionately closed-minded and unpatriotic.

Not surprisingly, this increase in partisan enmity in America has closely accompanied an increase in political violence. Recent data from the Survey Center on American Life announced that 29% of Americans admit that “taking violent actions” may be justified under certain political circumstances.

The data attributed the uptick in political violence - which both sides see as a problem - to the January 6 Capitol riots, radical Trump supporters and QAnon conspiracy theories, but conservatives counter that the 2020 BLM riots and Antifa are actually at fault. This can be seen in a Monmouth University poll revealing a shocking “47% of Republicans... would call [the January 6 incident] a “legitimate protest,” while “only 13% of Democrats accept that characterization.” On the other hand, Pew Research affirmed that Republicans, by a margin of approximately 69 percentage points, were far less favorable to the often violent George Floyd protests than Democrats were.

You’re probably nodding your head in agreement at all the indictments I make against whichever side you personally disagree with, but you’d caution against embracing the strikes against your own side. Ironically, this further proves my point.

I’m not implying that there should be some moral equivalency between the Right and the Left, nor am I saying that their ideas are comparably valid. There is unquestionably a standard of right and wrong when it comes to politics, and I, as an open partisan, happen to believe my side is right more often than the opposing side is.

But I also miss the old America.

I miss the country in which we could each believe that our opposing sides were respectively right, and not hate each other for it. The country in which Republicans and Democrats could have civil conversations with one another, without retrograding into baseless accusations and needless insults.

I miss the country where whom one voted for never dictated whether or not friendship with that person was possible. The country whose citizens lived out their belief in the famous words “I may not agree with what you say, but I will defend to the death your right to say it.”

That’s the America I miss.

We didn’t go wrong when we began to disagree - our diverse opinions and beliefs never have meshed well (thank God our founders gave us Federalism for that very reason). We went wrong when politics became so important to us that we could no longer see past our disagreements.

When we stopped helping each other, just because we disagreed.

I don’t want or need a uniform country, for America never was such a country. I want a united country. A country in which we can finally agree to disagree with basic decency, grace and respect.

A country in which the Right and Left can be absolutely unalike, and yet still, as Abraham Lincoln said, strive to the lofty ideal that “[w]e are not enemies, but friends.”

“We must not be enemies.”

This is why I joined Convention of States.

Of course, I believe in an objective standard of right and wrong. But I also believe that it does not make sense for the federal government to force the politics of whichever party happens to control the White House on the entire nation, roughly half of which probably disagrees with those politics.

With the nation’s attention always fixated on the national news, and the federal government regularly intruding into our daily lives, we have no shortage of things to bicker about. And it’s hardly surprising that politics has become so inescapable.

By utilizing this never before used Article V process, we can lessen the influence of the federal government, thereby enabling us to simply live our lives as self-governing citizens, without having to worry about the 24/7 news cycle or how the people we know might have voted.

Politics will always be important, to some extent, and we will always disagree with each other, but if we use Article V to restore our Federalist system of governance, we won’t have to be defined by our politics or our disagreements, but by our common identity as Americans.

If you support this cause, please sign the petition below!