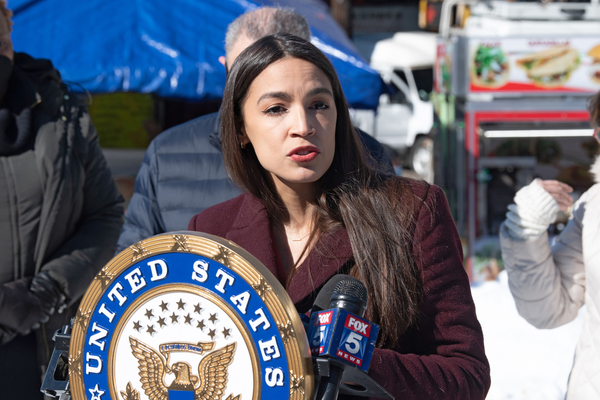 Economists across the political spectrum are sounding the alarm about inflation and economic catastrophe after President Joe Biden's $1.9 trillion COVID-19 "relief bill."

Of course, that isn't stopped the White House from introducing another "once in a generation," $2 trillion infrastructure package sure the blow out our nation's spending even further. Biden's bill will help fix roads and bridges, but it will also supposedly fight climate change, "promote racial equity," and shorten commute times, according to the president.

If you can believe it, Biden's comments aren't even the craziest thing to be said in Washington this week. Representative Alexandria Ocasio-Cortez said on Tuesday that Joe "Moneybags" Biden's infrastructure plan is actually too small.

"This is not nearly enough. The important context here is that it’s $2.25T spread out over 10 years," she said. "For context, the COVID package was $1.9T for this year *alone,* with some provisions lasting 2 years."

Biden's infrastructure package "needs to be way bigger," she said.

This is not nearly enough. The important context here is that it’s $2.25T spread out over 10 years.

For context, the COVID package was $1.9T for this year *alone,* with some provisions lasting 2 years.

Needs to be way bigger. https://t.co/eTQ7cxuTzF

For big-government progressives like Alexandria Ocasio-Cortez, no amount of spending is ever enough. They'll continue their attempts to fund their radical agenda using taxpayer dollars until our country has spent itself into oblivion.

There's just one problem: money isn't infinite, even for the greatest economy the world has ever seen.

As Kevin D. Williamson points out over at National Review, the Democrats' infinite spending policy only works when interest rates remain low. Once those rates begin to rise to historical rates, our interest payments on the national debt could jump to more than 100 percent of tax revenue. If that happens, we risk defaulting on our debt, which "would crater the U.S. economy and set off an economic crisis unlike anything the world has ever seen."

Something must be done to stop politicians like Ocasio-Cortez. Their irresponsible policies are risking the futures of our children and grandchildren, and the threat to our country could even impact our own lives.

Fortunately, the Founders knew this might happen. That's why they allowed the states and the people to propose constitutional amendments using the Convention of States option as outlined in Article V.

An Article V Convention of States has the power to propose constitutional amendments that force Congress to be fiscally responsible. These amendments can mandate a balanced budget, but they can do so much more. If Congress were required to balance the budget, they would simply raise taxes to fund their pet spending projects. A Convention of States could also propose amendments that cap spending at certain limits and prohibit Congress from raising taxes.

With this complete package of constitutional amendments in place, politicians like AOC will no longer be able to fulfill their big government dreams. They'll be severely limited in how much of our money they can spend, and they'll be forced to get our nation's finances under control.