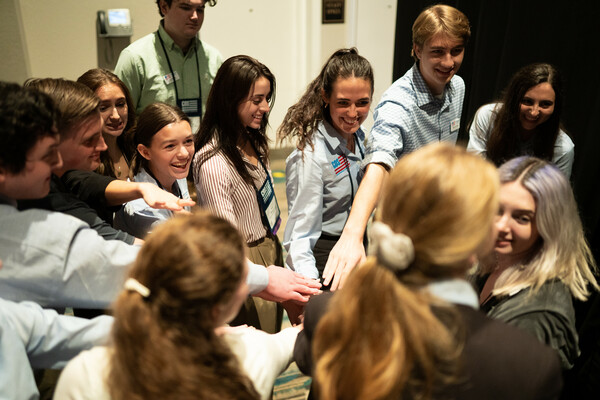 “The boys of the rising generation are to be the men of the next, and the sole guardians of the principles we deliver over to them,” said Founding Father Thomas Jefferson in a reminder that the future prosperity of our nation will forever hinge upon whether young Americans take up the cause of freedom that their ancestors so valiantly bled and died for.

Sadly, the popular sentiment among older voters is that the twenty-first century’s “rising generation” has utterly failed at this. With each new election cycle, as the electorate becomes younger and younger, many worry that today’s voters are more easily swayed by promises of free stuff than a passion for preserving freedom.

As faith in free enterprise falters, young Americans are now just as likely to support socialism as they are to support capitalism. According to Harvard, “85% of young Americans favor some form of government action on student loan debt” but no one seems interested in the question of whether the government even has the authority to do so. Additionally, polling reveals that Gen Z'rs and Millennials are some of the least patriotic Americans.

In light of these numbers, we have good reason to worry.

But even in this generation, there is a remnant that still believes in the principles of liberty. Young patriots are rising up, fighting for America’s future. They have not lost hope that their generation can turn this nation around.

Each year, Convention of States is blessed to work with a handful of these emerging leaders through its internship program. These incredible individuals are daily in the field, often confronted with radical ideas at their schools and from their peers. They can offer us timely insight into what it will take to win back the rising generation.

One intern, Lilianna, noticed that students at her school tend to be influenced by misconceptions about climate change and global warming.

“I think they have a misconception that people on the right don't care about our planet and are prioritizing greed over green,'' she said. “I know there are people that really do believe that on the right but I think generally that is a misconception developed in public schools.”

“Ultimately, I think many are just ignorantly following the crowd when it comes to voting,” she added. “They know it is important but they don't take the time to properly educate themselves on the candidates they are voting for. I have also noticed that they have very little understanding of history. They know the major events but honestly, it seems like even that has been corrupted in the school systems.”

Another emerging leader, Zander, explained that young voters must understand that they should not blindly vote for “the party of love and acceptance” but for whoever “actually helps people who are struggling.”

“Without good economic leadership and safe neighborhoods,” he said, “quality of life for all people will continually decrease.”

Zander is currently leading a political group for teens. He told Convention of States that “seeing a rising involvement of teenagers and young adults” gives him hope for the future.

“I value liberty over security,” said Ren, another young patriot, when asked why she was fighting for America. “I think there’s been a swing towards asking the government for security instead of securing our rights and freedoms. I don’t agree with the way the pendulum has swung. I respect the cost of the freedom that we have and I want to protect it. It cost a lot, in the beginning, to create a nation like this and it costs a lot now to keep that freedom. I really do want to do everything in my power to honor those people who fight for our freedom.”

She added that she finds hope in watching parents and young people waking up and fighting back against the insanity of modern politics. “As soon as you start messing with kid’s lives or messing with human identity,” she said, “that’s where people are saying ‘I’ve had enough of this’ and start fighting back.”

Ren concluded that being surrounded by “other like-minded people who are passionate about preserving liberty and speaking truth” also gives her hope that her generation will make a difference in America.

Lilianna, Zander, Ren, and their fellow COS interns may be an exception to today’s norm, but they are far from alone. It may often seem that this generation has lost faith in America, but there are those who have not given up. Their efforts to save freedom will have a ripple effect on the country – and the world – for generations to come.

Hope is not lost. The torch of liberty is alight in the hearts of the rising generation, and they will not let it grow dim.

To learn more about the Emerging Leaders Program and what you can do to help cultivate the next generation of American patriots, visit Internships at Convention of States today!