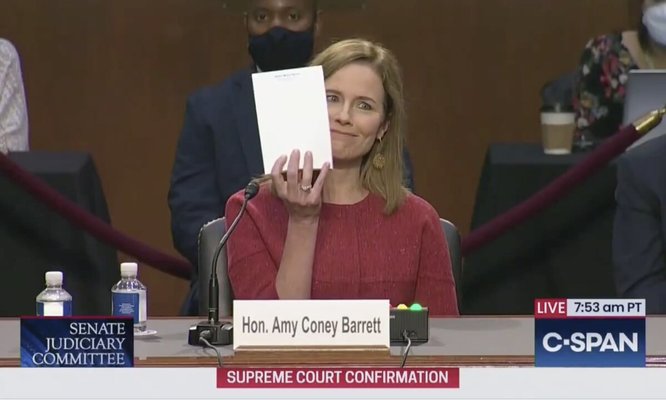 Bradley Whitford is most famous for playing Josh Lyman on the hit TV show, The West Wing. Unfortunately for Whitford, playing a smart lawyer on TV didn't make him smart or knowledgeable about the law.

Whitford tweeted this recently in response to the Amy Coney Barrett nomination hearings:

I like asking conservative women who call themselves “originalists” if they’ve ever voted.

Whitford's point (we think) is that originalism -- the idea that the Constitution should be interpreted as its authors intended -- would eliminate a woman's right to vote.

There's just one problem: women do have the right to vote under the 19th Amendment to the U.S. Constitution. That amendment reads:

The right of citizens of the United States to vote shall not be denied or abridged by the United States or by any State on account of sex. Congress shall have power to enforce this article by appropriate legislation.

If an originalist like Amy Coney Barrett were to be asked to interpret this amendment, she would argue (of course) that women have the right to vote.

Judicial activists who do not believe in originalism hate justices like Amy Coney Barrett because they want the Supreme Court to be able to interpret the Constitution according to their progressive ideology. They don't like being bound by the text and intent of the Constitution, and they believe the Constitution is outmoded, outdated, and bigoted.

Originalists, on the other hand, believe that justices should not have the power to interpret the Constitution however they see fit. National Review's Charles C. W. Cooke made this argument in a recent article:

The central originalist argument is that the Supreme Court should not act as a council of revision that takes it upon itself to amend the Constitution according to its preferences, but, rather, that it should wait for the people to make changes to the text using the amendment process that is laid out in Article V.

And this is exactly what Amy Coney Barrett argued in her nomination hearings:

This is what we're all about at the Convention of States Project. We want to amend the Constitution the right way. Not via judicial activism but by the will of We the People.

We believe our country needs constitutional amendments that limit the power of the federal government, mandate term limits for federal officials, and impose fiscal restraints on Congress.

We the People can propose those amendments by calling the first-ever Article V Convention of States. It takes 34 states to call this Convention, and already 15 states are on board.

Join the over 4 million Americans who want to use the Founders' tool to limit federal power. Sign the petition below!