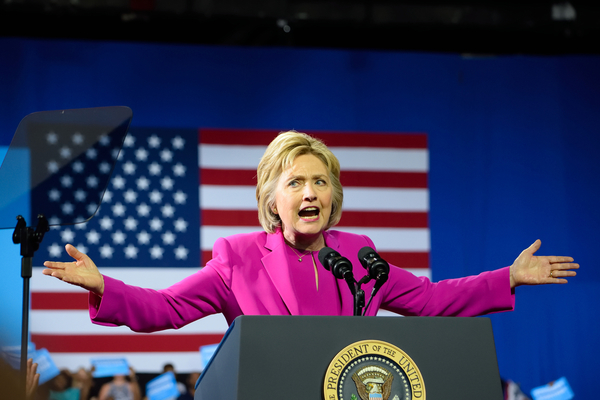 Every few months, Hillary Clinton comes out of the woodwork to say something terrible.

Now she's at it again. This time, she sounded off on President Joe Biden's first 100 days in office and concluded that the last three months have been a resounding success. Why? Because Americans have realized their need for big government, and Joe Biden has taken advantage of the COVID-19 pandemic to "push his agenda as far as possible."

“But it wasn’t until the pandemic that I think a truly working majority of Americans, crossing party lines as we’ve seen, because of the approval that Republicans and independent voters are giving Biden, suddenly understood in a clear way that, you know what, there’s lots of times when we need the government, and we’ve been exposed as lacking in the kind of investments and support that we, as Americans, should be providing each other with the government as our partner.

“And I’m thrilled that President Biden is taking advantage of this moment to try to push the agenda as far as possible. I think both, you know, Presidents Obama and Clinton did, too, but they were more constrained given what the climate was politically during their administrations. So, yes, I think it builds on a lot of what did happen in prior Democratic administrations. But it also goes further. And it can go further because people understand, guess what, you know, we kind of were failed by our government for four years when we confronted one of the worst health care crises, economic crises that our country has seen.”

Ironically, Hillary's husband, President Bill Clinton, claimed in 1996 that, "the era of big government is over." Today, the Clintons are singing a different tune. Hillary sees that the COVID-19 pandemic has given Democrats the perfect excuse to push their big-government agenda, and she's cheering President Biden's historic spending and massive overreach.

At least they're saying the quiet part out loud. No liberty-loving American can argue that the radical left doesn't want to expand the role of the federal government, decimate the rights of the states, and spend our country into the ground. Biden has been aggressively pursuing all three goals, and few of his colleagues on the left have offered any resistance.

The lines have been drawn; it's time for We the People to take a stand.

These amendments can limit the power, scope, and jurisdiction of the federal government. They can impose fiscal restraints on Congress, and limit the terms office for federal officials. Most importantly, they can end the threat of big government once and for all. Amendments crafted at a Convention of States (if later ratified by 38 states) can restrict federal jurisdiction to a narrowly tailored set of topics--and leave all other issues, including healthcare, energy, the environment, and others, to the people and the states.