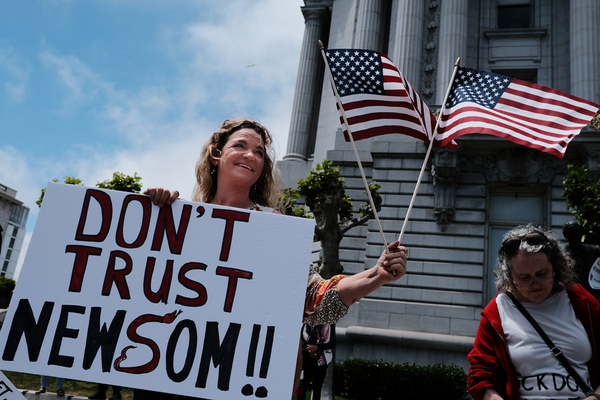 By now you've probably heard that the effort to force a recall election for California Governor Gavin Newsom has all but succeeded. There are a few procedural hoops to jump through, but Californians have secured 1,626,042 verified votes to force the recall--far more than the 1,495,709 votes needed.

Newsom has bungled his way through the COVID-19 pandemic, and the people of the Golden State have had enough. He was caught flaunting his own mask and social distancing mandates at an expensive restaurant, and he needlessly cracked down on churches for holding in-person gatherings.

Now, the people have spoken, and challengers will have the opportunity to unseat Gov. Newsom in the fall.

But the Newsom recall effort is about more than a bad California governor or the COVID-19 pandemic. It's about the power of We the People to fix the problems we see in our governments. It's about instituting reform at the state level without billionaire backers or fancy media campaigns. And it proves why we should empower states--not the federal government--to oversee most of the policies and laws under which we live.

At the state level, everyday American citizens have real power. As the Newsom recall campaign proved, even the most entrenched state governments are more willing to respond to We the People than the federal government. Citizens can schedule sit-down meetings with their state representatives, and more easily hold state bureaucrats accountable for their overreach and abuse.

Imagine if the majority of the laws under which we lived were developed, funded, and implemented by the states. Rather than worry about a faraway bureaucrat in Washington, We the People could simply drive down to the state capitol and voice our concerns. State legislators who failed in their duties could be recalled or replaced, and the American people would feel far less frustrated with a national government that does not care about our needs and desires.

The U.S. Congress will never release their stranglehold on power in this country. They believe they know best, and they'll never give the states total control over education, energy, the environment, healthcare, or the myriad other topics they control. That's why we need an Article V Convention of States.

Amendments might be written, for example, to limit the ability of the federal government to spend money or legislate on any topic not expressly mentioned in the Constitution. This would revert to the states all policymaking on the majority of domestic issues, and give state governments real power to legislate on the topics their constituents care about.

California just proved what We the People are capable of at the state level when they unite and work together. It's time to give everyday Americans even more power over their daily lives, and a Convention of States can make it happen.

Sign the petition below to tell your state representatives you want a Convention of States!