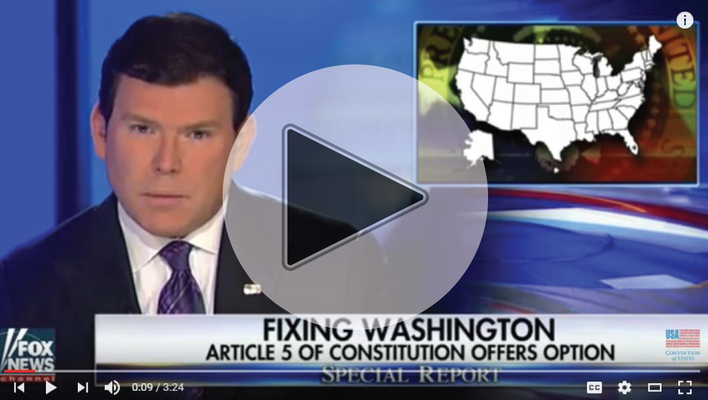 When Democrats launched into a spontaneous chorus of  "Na na na na, hey hey, goodbye"  on the House floor after the passage of the American Health Care Act last month, it may have marked a modern-day low mark in open hostility on the House floor.

It and numerous other cultural barometers – from cable news contributors losing their cool, to contentious town halls, to street fights – are signaling tectonic rumblings in America's political health.

In 1804, Vice President Aaron Burr and former Treasury Secretary Alexander Hamilton settled their bitter political feud with a pistol duel that took Hamilton’s life, but Article Five of the Constitution offers a more civilized resolution – a Convention of the States.

It is an option not exercised since before the signing of the Constitution. But it's gaining new strength and new adherents.

"It is the only process that is available to address what Washington is doing. Washington is not going to fix itself," said radio talk show host and author, Mark Levin.

In his book, The Liberty Amendments, Levin dissects the remedy of a Convention of the States. With 9 million listeners a day on radio and a devoted following that shows up by the thousands for his book signings, Levin has helped increase its popularity, and lent grass-roots energy to the Convention of States Project. It claims 2.8 million volunteers, and is expected to grow to 10 million by the end of this year, with district directors in every congressional district.

While 11 state legislatures, most recently Texas, have already supported a convention of the states, that number is far short of the 34 states the Constitution requires before a convention can be called.

With Republicans in full control of 32 state houses, supporters believe a convention is within reach. They say its agenda would form around a set of core principles. Among them:

*reducing the federal regulatory burden on the states

*and allowing a two-thirds majority of the states to override Supreme Court decisions, federal laws and regulations.

"I said on the Senate floor in 2006, there’s a rumble in our country. You just saw part of that rumble in the last election," says former U.S. Senator Tom Coburn, R-OK, a supporter of a Convention of the States, whose book on the subject is set to be released soon. "The Founders added this to the Constitution because they recognized that never in history has a central government ceded power back to its people. So this is a safety check."

He told Fox News this week that Congress's inability to balance its checkbook is his single greatest concern.

"We have $144 trillion in debt and unfunded liabilities. For every taxpayer that is a million bucks," he said. "But for the millennials, it's $1.7 million each that they're going to have to come up with over the next 50 years."

Opponents fear that given the lack of overseeing authority, and the dearth of specificity in Article 5 about how such a convention would be governed, could lend itself to abuse by special interests, and the potential evisceration of hard-won legislative and court victories.

"Any Constitutional right could be up for grabs from freedom of speech, the 2nd amendment, the right to privacy to overturning Supreme Court cases around marriage equality and healthcare and abortion," Jay Riestenberg of Common Cause told Fox News.

They also fear a convention would be tilted heavily toward a conservative agenda, given how Congressional and state legislative districts have been carved in red states to heavily favor GOP incumbency.

But the Founders provided yet another safeguard against such overreach. They required 3/4's of the states, or 38, to ratify any Constitutional amendment passed in a convention of the states.