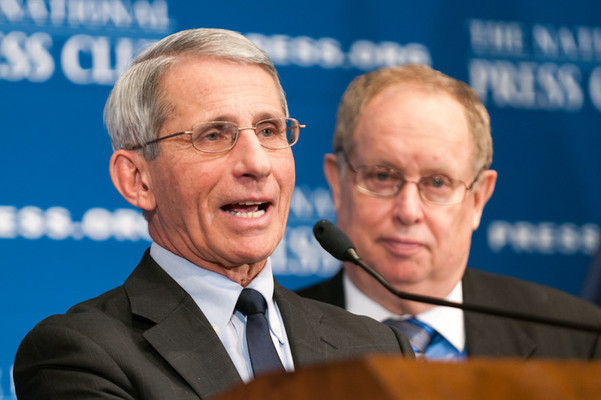 If the last 13 months have taught us anything, it's that our "public health officials" have far too much power. COVID-19 lockdowns, mask mandates, and business closures are only a few of the tyrannies they've imposed, and all they needed was a public health crisis to do it.

We're not saying COVID-19 wasn't a crisis, but what happens when one of our officials claims something is a "health emergency" when it really isn't?

We may be about to find out.

Dr. Anthony Fauci told CNN host Dana Bash on "State of the Union" over the weekend that he believes gun-related violence is a "public health issue."

“Myself, as a public health person, I think you can’t run away from that,” he said when asked whether he believes gun violence is a public health emergency. “When you see people getting killed, I mean, in this last month it’s just been horrifying what’s happened. How can you say that’s not a public health issue?”

Dr. Anthony Fauci on whether he considers gun violence a public health emergency: “When you see people getting killed, I mean, in this last month, it’s just been horrifying what’s happened. How can you say that’s not a public health issue?” #CNNSOTU pic.twitter.com/9lEhV3aZqL

As we've seen, declaring something a public health emergency gives enormous, unaccountable power to bureaucrats in health departments across the country. It has allowed them to force Americans to stay at home and wear certain medical devices, and their policies have destroyed the livelihoods of countless people.

If President Joe Biden, following Fauci's advice, declares "gun violence" a "public health crisis," he will be empowered to infringe on the constitutional rights of millions of Americans. Federal and state governments did it with COVID over the last year--why not with gun violence?

If you've been watching Convention of States Action President Mark Meckler on his show, Battlecry!, you know that we have one simple response to Biden's gun control push: Hell no, Joe.

We're not about to let this administration infringe on our constitutional right to keep and bear arms, and we have a plan to end the threat of federal gun control once and for all: an Article V Convention of States.

A Convention of States is called and controlled by the states, and under our plan, has the power to limit the power, scope, and jurisdiction of the federal government.

These amendments can make clear that Washington has no right to control gun ownership and use. They can fortify our rights as described under the Second Amendment and make those rights impervious to attacks from public health bureaucrats.

More broadly, these amendments can shrink the power and jurisdiction of federal bureaucrats who operate outside the will of We the People. They can cut the staffs of some federal agencies and eliminate others altogether. We don't need an alphabet soup of bureaucracies controlling our daily lives, and a Convention of States can shrink the federal government for the first time in 100 years.

Dr. Fauci has no right to attack gun ownership for the sake of "public health." After We the People call and convene the first-ever Article V Convention of States, we'll never have to fear a federal bureaucrat again.