It is important to remember how good things were in the U.S. before the federal government got so out of control and became fiscally irresponsible.

Deficit spending has gobbled up the private savings to be used for important investments into our nation's economic growth.

The image below is for the years from 1953-1973, and it shows family income on top (orange) and total debt, divided by family incomes on bottom (blue). 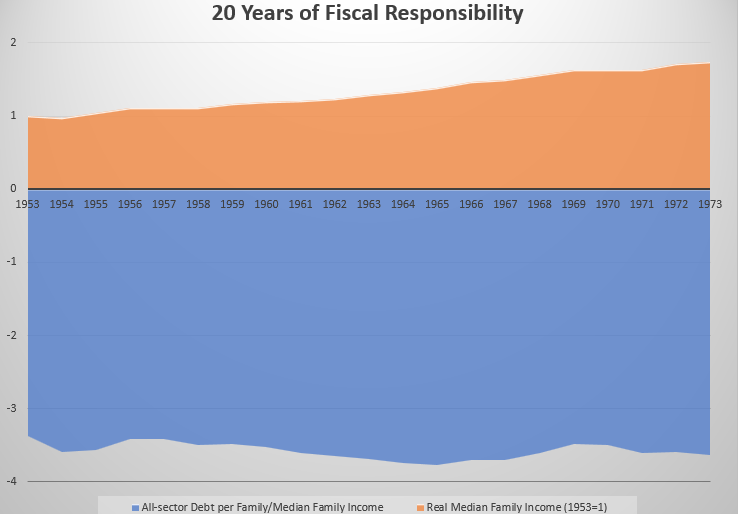 The first thing to note is the orange area, showing that we were getting richer over time, as measured by how much actual goods and services that middle (median) American families could afford.

This is the "real median income," adjusted for inflation in order to correct for any rise in the prices of goods and services. In 1973 the middle American family could afford to buy about 75% more things than could that same family from 1953.

The second thing to note from the graph is the debt burden (blue). While it is explained in some detail below, the important thing to remember is that our finances were in order (debt was not rising in relation to our incomes).

We could afford all of our spending back then. We were earning our keep and living within our means.

The blue area takes all the debt in the country (from every sector) and divides it equally among each American family--just to see the hypothetical share of all debt that each family would have if debt was equally divided.

Again, the important thing to note is that incomes were rising but debt was not. Incomes were continually up from before. Debt was continually stable (not increasing). That is how you know that we were getting richer and more financially secure as a nation.

If any "expert" ever tells you that we need more debt in order to grow the U.S. economy, point them back to the two decades of 1953-1973 (when we almost doubled our GDP without any net increase in debt).

In the 1950s, 1960s, and 1970s, Americans could dream big for themselves and their children. They could vacation more and spend more of their free time how they wanted.

They could retire early if they wanted, simply by saving some of the steady and persistent increases in real income they were getting (without any increases in the overall debt leverage).

We can have that all again, if we take the right actions (details below).

Now let's look at a different 20 years (1992-2012), one which included much more spending and regulation from the federal government. 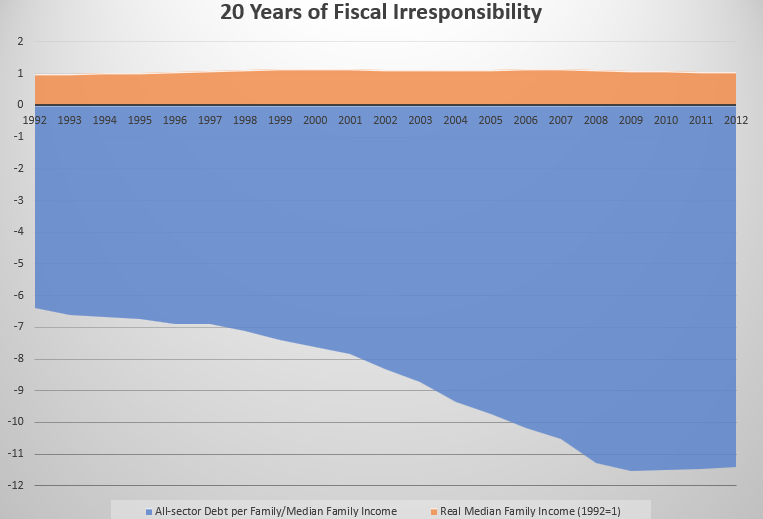 The first thing to note is that middle incomes are no longer rising over time (by any meaningful amount). If the middle income in America had allowed you to afford two acres of land in 1992, then that would be about all you could afford on middle income in 2012.

The second thing to note is that the debt load was no longer stable but was increasing every year--putting us into a worse and worse financial position, from one year to the next.

Because there used to be so much less debt making claims on our incomes, middle-income families in America were actually "wealthier" in 1992 than they were 20 years later.

By 2006, total debt was so high that if you divided it equally among U.S. families, each family's "share" would be more than 10 times the median family income! That's hundreds and hundreds of thousands of dollars of debt per U.S .family (now almost one $1 million per family)! Here is a side-by-side comparison:

Keep in mind that the scale on the right is larger (drops down much deeper), so that it can capture the enormous amount of new debt which has been put onto the nation's shoulders, mostly in response to enormous federal deficits. The main thing to compare is the relative size of the orange area in each chart, in relation to the size of the blue area in the chart.

How in the world does a nation get itself into this much debt?

Said another way, domestic investments in America--because of the overspending by our own federal government--are over a trillion dollars lower than they had to be. How much more financially secure would we be if we had an extra trillion dollars to invest in ourselves and in our own economic growth each year?

So, not only does the government deficit keep our wages from rising, but--because it chews up our savings (which we could have used for investments)--it keeps us from being competitive to produce goods to trade with the rest of the world. This creates a trade deficit.

If we have to buy much more from the rest of the world than it currently buys from us (because our federal deficits lowered our capacity to make domestic investments), then we can only continue to do that by mortgaging our own future wealth.

This will happen either through selling U.S. equity (i.e., stocks) abroad or through getting loans from abroad (selling U.S. government or corporate bonds to foreign investors). It is the only way that we can keep giving them more money than they give back to us (when we buy so much more from them than they buy from us).

Either way, our own future earnings potential is lowered by a continued trade deficit. We end up either selling the farm to foreign investors or taking out a direct loan from them.

It is the responsible thing to do for ourselves and for our children.

Luckily, the American Founders envisioned a time when it might be necessary for We the People to exercise some control over our own federal government.

They put a second clause into Article V of the U.S. Constitution-- the section dealing with amendments. This clause provides the several states the ability to hold a convention of their own with regard to proposing specific amendments to the Constitution.

The Convention of States Project has crafted a resolution for just such a convention for proposing amendments on three necessary topics:

Please support the Convention of States Project by signing the petition for the resolution, contacting your local legislator, volunteering some of your time, or by making a financial gift.

Let's use the tool our Founders provided for us and get back to where America has a bright future once again.

[3] Board of Governors of the Federal Reserve System (US), All sectors; debt securities and loans; liability, Level [TCMDO], retrieved from FRED, Federal Reserve Bank of St. Louis; https://fred.stlouisfed.org/series/TCMDO