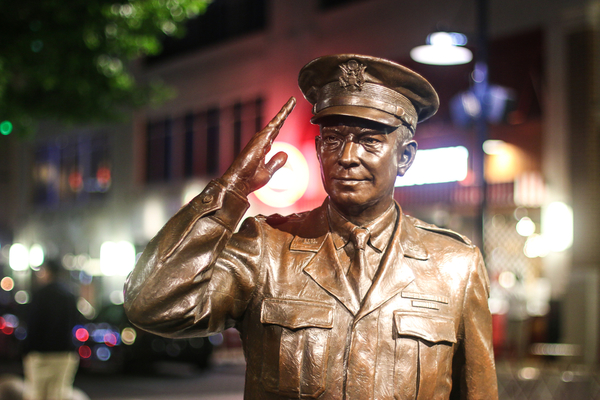 On May 26, 1963, Dwight D. Eisenhower addressed the graduates of Defiance College in Defiance, Ohio. He encouraged the students to become "productive, constructive, creative" members of society, but, more than that, he encouraged them to fight for self-governance via an Article V amendments convention.

Those who wrote our Constitution designed a government that would be a servant, responsive to the people, managed by the people. Their foresight was equal to their faith in the people. And through decades of growth and change their work - after the Bill of Rights - required few amendments. But the founding fathers could not foresee that, in the space of three lifetimes, the Republic would extend from the Atlantic three thousand miles out into the Pacific, or overleaping an independent neighbor would reach into the Arctic; or that an economy of small farms and large plantations, whose cities existed mainly as ports of entry and exit, would be transformed into massive concentrations of people forming communities without regard to county or state lines. They could not know that in less than two centuries the immensity of domestic and international affairs would tend to create in us a feeling of individual helplessness and even lead us into an unthinking abandonment of personal and local responsibility to a few men in government, giving to them a frightening power for good or evil; and almost certain to invite error or abuse.

Through all these developments government more and more escapes the control of the people. Though in townships and villages, school districts and towns, citizens still make decisions for themselves, the room for decision daily shrinks because each must be made in the context of responsibility and power lost to a distant bureaucracy. Framers of the Constitution could not foresee the exact causes that might bring about such a trend but they knew that the potential danger existed. Only an inspired and educated citizenry will provide the power to keep American from following the path of earlier civilizations in which the love of country, the dedication of service to society weakened through the love of ease and the worship of affluence.

Against the possibility that ordinary and customary processes of self-government might weaken or be found ineffective, or later laws and interpretations of original constitutional intent might conflict with the mass convictions of Americans, the Founders provided a final and decisive means of reformation and restoration by the people themselves. Through their state legislatures and without regard to the federal government, the people can demand and participate in constitutional conventions in which they can, through their own action, adopt such amendments as will reverse any trends they see as fatal to true representative government. I do not here refer to any amendment presently proposed, or under consideration by the several states. Moreover, constitutional amendment is not to be lightly undertaken. But if you and your generation fortified by a superb education, with access to the knowledge and wisdom of the ages, and imbued with the spirit of our founders, decide that reformation of a radical kind becomes due - then I say, let nothing stop you! Study, examine, survey, think, consider, decide and then - by all means - act!

If we want to ensure the survival of liberty in the face of an overreaching federal government, we have to follow Ike's advice. Our Constitution has been under attack for decades, and only constitutional amendments can restore the principles that have made our nation great.

Sign the Convention of States Petition below to voice your support!