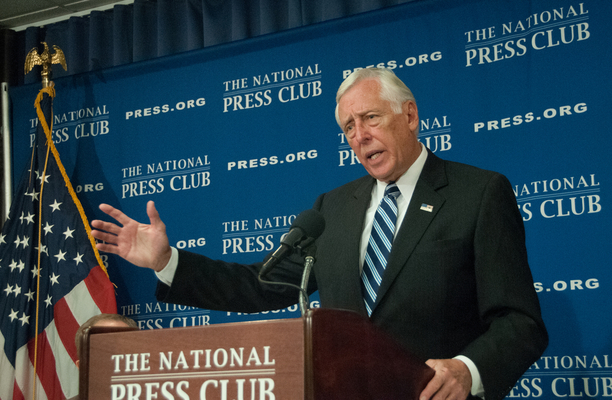 Earmarks are one of the most dangerous ways that Congress wastes and misspends taxpayer dollars. Lawmakers hide these provisions in larger spending packages to fund pet projects, repay donors, and otherwise use taxpayer dollars for their own political advantage.

Knowing this, the late Senator Tom Coburn spearheaded a move in 2011 to ban earmark spending in Congress. Amazingly, it passed, and earmarks have essentially been banned for the last 20 years.

With Democrats in control of Congress, that ban may be coming to an end. Led by House Majority Leader Steny Hoyer (pictured above), this proposal would allow Congress to pack spending bills with earmarks that benefit those who have donated to their reelection campaigns.

As Citizens Against Government Waste President Tom Schatz said, "Earmarks are the most corrupt, costly, and inequitable practice in the history of Congress."

They led to members, staff, and lobbyists being incarcerated. In a form of legalized bribery, members of Congress vote for tens or hundreds of billions of dollars in appropriations bills in return for a few million dollars in earmarks. Earmarks go to those in power, as shown during the 111th Congress, when the 81 members of the House and Senate Appropriations Committees, who constituted 15% of Congress, got 51% of the earmarks and 61% of the money. Restoring earmarks will lead to the same results.

Some members of Congress have proposed a permanent ban on earmark spending, but it's unlikely to pass. We can't trust Congress to limit its own spending, and we can't trust them to put the good of the country ahead of their own political gain.

That's why the states and the people must come together and call the first-ever Article V Convention of States.

Amendments can be proposed that specifically ban earmark spending. These amendments can prohibit members of Congress from directing funds to their own pet projects and put real limits on Congress's ability to repay their political donors.

If we want to change Washington, D.C., we can't rely on our federal politicians. We must look to the people and the states, and Article V empowers us to institute the reforms our country so desperately needs.