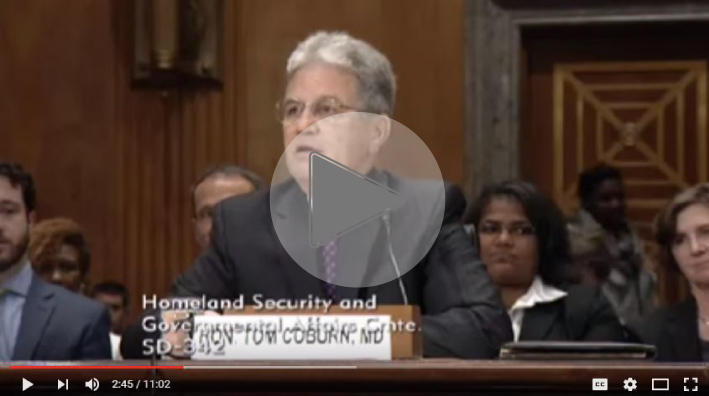 The following article was written by Elizabeth Harrington and published on the Washington Free Beacon.

Tom Coburn, the former senator currently leading a movement for a Convention of States, unloaded on Congress during a hearing before the Senate Committee on Homeland Security and Governmental Affairs Wednesday.

“America doesn’t trust you anymore. That’s the truth,” Coburn said, appearing alongside the head of the Government Accountability Office during the hearing to discuss duplicative federal programs.

The GAO recently released its annual report, finding the federal government could save hundreds of billions of dollars just by consolidating duplicative programs.

Coburn, making his first appearance before the Senate since his farewell speech when retired in late 2014, pleaded with Congress to take action to reform government, simplify the tax code, and save taxpayers billions of dollars in the process.

Coburn is leading a movement of more than 1 million activists working to hold a Convention of the States, allowed by Article V of the Constitution, to force Congress to balance the budget. He said 10 of 34 states needed have passed resolutions so far.

“I would just tell you a little of my background this last year in 2015 I spent my time in 21 different states,” Coburn told the committee. “And America doesn’t trust you anymore. That’s the truth. Because they don’t see the actions coming out of Congress that should be coming out.”

“And that doesn’t mean that they’re right all the time, but you’ve lost their confidence,” he said. “And that’s not one party, that’s both. And so when you have hundreds of billions of dollars that could be saved and aren’t, and they know it. You know, they actually read your reports. People online, and then they use social media, pass it around.”

Coburn praised the Homeland Security and Governmental Affairs Committee, of which he served as ranking member for two years, but said much more work needs to be done.

“The unfunded liabilities of this country, with its debt, is $142 trillion,” he said. “That’s $1 million per family, or that’s $1 million per taxpayer. Nobody knows what a trillion is but when you’re telling a young family with small kids, ‘Oh, by the way, here’s the debt burden that’s coming to you over the next 25 years, you better be prepared for it.’”

Coburn said “too much government” and “too intrusive a government” is to blame for median family incomes being the same size as in 1988.

Join Senator Coburn in his fight for fiscal responsibility!