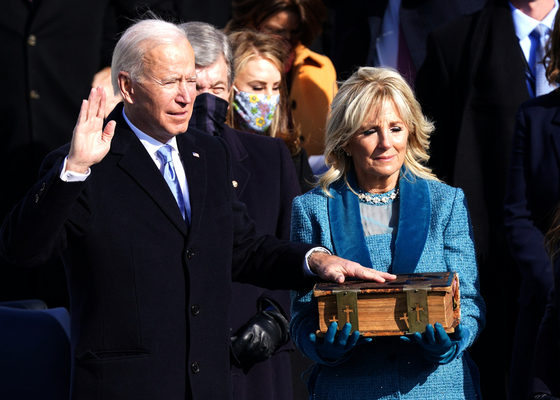 Remember back in October when then-presidential candidate Joe Biden said he was "not a fan" of packing the Supreme Court?

Well, it's been exactly one week since he took office, and it looks like he's already changing his mind.

Politico reports that the Biden administration is creating a "bipartisan commission to study reforms to the Supreme Court and the federal judiciary.”

While the commission's "specific mandate is still being decided," everyone knows what this means: Biden wants the cover of bipartisan "experts" before he moves forward with adding justices to the Supreme Court.

While some commissioners appear bipartisan, like Caroline Fredrickson, who served in the Bush administration, the commission also includes Obama officials and Ivy League graduates.

Even Fredrickson has “hinted that she is intellectually supportive of ideas like court expansion,” saying in 2019 that “I often point out to people who aren’t lawyers that the Supreme Court is not defined as ‘nine-person body’ in the Constitution, and it has changed size many times.”

Biden said in October that while he is "not a fan" of court packing, there are "a number of alternatives that go well beyond court-packing.”

We're not sure what options would be "beyond" court packing, but we'd rather not find out.

Because let's be honest: the only reason Democrats want to "reform" the Supreme Court is because they don't like the current ideological makeup. The campaign is politically motivated, through and through, and the results likely won't be in the best interests of the American people.

If Democrats follow through on their plan to end the filibuster and pack the Supreme Court, the court will lose all pretense of integrity. Each party will add or remove justices whenever they gain power, and American trust in the judicial system will fall even further.

Over five million Americans have voiced their support for the Convention of States movement, and 15 states are on board. When 34 states call for a Convention, all 50 states meet to propose amendments. Our resolution allows for amendments that limit federal power and spending, and impose term limits on federal officials.

We can't trust the President, Congress, or a "commission" to reform anything in Washington. If we want true reform, it's up to us, and we can do it with a Convention of States.