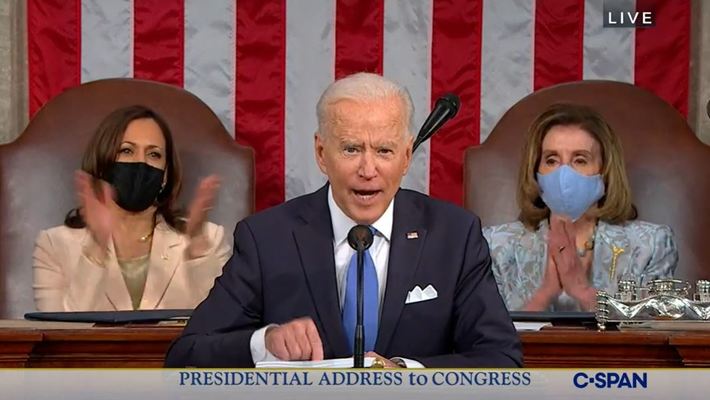 Last night, President Joe Biden announced to the world his intention to turn the United States into a big-government socialist paradise.

Free preschool, free college, free family and medical leave, free childcare, free healthcare, and good-paying jobs were only a few of the goodies the president promised the American people if they keep him and his party in power.

Biden's plan would radically transform the social contract in America, and he's not even trying to hide it. Rather than having to rely on their own hard work and ingenuity, Americans under Biden's proposal would have to rely simply on the good will of an all-powerful federal government. Washington will supply everyone's needs using the money from a simple, "fair" tax hike on the "wealthiest Americans."

The president's gambit is so transparent it's almost laughable, and liberty-loving Americans aren't going to fall for it. The United States didn't become the world's most powerful nation by relying on handouts from the federal government. We built this country on hard work, perseverance, and most importantly, freedom. Biden's plan would destroy the American spirit by transforming self-governing American citizens into little more than serfs of the federal government.

Worse still, he's going to pay for his plan by 1) raising taxes on the middle class and 2) stealing money from future generations. The president insists he won't raise taxes on anyone making less than $400,000 per year, but he'll never pay for these policies with those taxes. He'll have to raise taxes on virtually every American along with increasing the deficit and national debt.

America is at a crossroads, and President Biden just posted the signs. Do we want to continue down the path towards poverty and servitude to an all-powerful national state? Or do we want to reassert our rights as Americans and restore the freedoms and liberties that have made our nation great?

The Convention of States Solution

All true American patriots will choose the path to liberty, but many do not know the way. Fortunately, the Founders gave us a solution in Article V of the Constitution.

Article V proposes two ways to amend the Constitution: via Congress and via the states. All amendments so far have been proposed by Congress, but there's another option.

A Convention of States is called and controlled by the states and also has the power to propose constitutional amendments. Thirty-four states must call for a Convention for it to be convened, and states propose amendments when a majority of the 50 states agree to one.

Once amendments are proposed, they go back to the states, where 38 states must agree to the amendments for them to be adopted into the Constitution.

This avenue has never before been tried, but it's our most powerful tool to fight back against President Biden's big-government agenda. A Convention of States can propose amendments that limit the power, scope, and jurisdiction of the federal government. It can propose amendments that impose fiscal restraints on the federal government and limit the terms of office for federal officials.

These amendments would make Biden's scheme impossible to implement. With limited federal power and an even smaller federal budget, Biden would be forced to focus on only those things that properly fall under federal control. Foreign matters and true inter-state affairs may still be under Washington's purview, but all the domestic policies Biden wants to implement would be prohibited.

Over 5 million Americans have voiced support for the Convention of States movement, and 15 states are on board. To add your name to the list, sign the petition below!