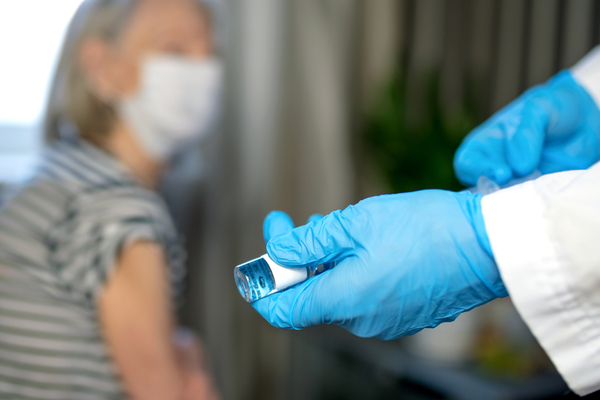 UPDATE: Since we published the post below, Joe Biden's Health and Human Services Secretary Xavier Becerra took to cable news to adamantly defend Biden's plan to go "door-to-door" to see which Americans had taken the vaccine:

“Perhaps we should point out that the federal government has spent trillions of dollars to try to keep Americans alive during this pandemic,” Becerra said.

“So it is absolutely the government’s business,” Becerra continued. “It is taxpayers’ business if we have to continue to spend money to try to keep people from contracting Covid and helping reopen the economy.”

Incensed, Becerra added that “knocking on a door has never been against the law,” and suggested that Americans who do not want to be questioned about their vaccine status simply do not answer the door.

“[They] don’t have to answer. But we hope you do,” Becerra concluded.

Don't want to take the COVID vaccine or haven't had a chance yet? If Joe Biden gets his way, you may soon be getting a knock on your door.

As part of a larger campaign to push more Americans to take the shot, Biden and his officials have launched a "door-to-door" program to convince reluctant people to roll up their sleeve and get the injection.

"We are continuing to wind down the mass vaccination sites that did so much in the spring to rapidly vaccinate those eager to get their first shot and their second shot for that matter if they needed a second," Biden said. "Now we need to go to community by community, neighborhood by neighborhood, and oftentimes door to door, literally knocking on doors to get help to the remaining people, protected from the virus."

BIDEN: "We need to go community-by-community, neighborhood-by-neighborhood, and oft times door-to-door, literally knocking on doors" to get people vaccinated. pic.twitter.com/oJ2lG9bqaw

And no, it wasn't just a slip of the tongue. White House Press Secretary Jen Psaki used the exact same language in a separate press briefing.

"The President will outline five areas his team is focused on to get more Americans vaccinated. One: a targeted community by community door-to-door outreach to get remaining Americans vaccinated, by ensuring they have the information they need on how both safe and accessible the vaccine is," she said.

If the idea of a federal agent (or a "community leader") knocking on your door with syringe in hand sounds dystopian, well, you're right. The federal government has no business launching a campaign to knock on the doors of American citizens. They're free to offer the vaccine and provide information, but at the end of the day, the American people have the right to make their own decisions.

That, of course, is the heart of the issue: who should have the power to decide? We the People or the federal government?

For too long, federal bureaucrats and politicians have claimed the right to make decisions for individual Americans and their families. These "experts" "know best," and they think we should fall in line.

That ends now. Over 5 million Americans have joined the effort to call the first-ever Article V Convention of States, and the movement is gaining steam. A Convention of States is the only mechanism that allows the states, not Congress, to propose constitutional amendments that limit the power of the federal government. These amendments can eliminate the alphabet soup of federal agencies, shrink federal jurisdiction to a narrow set of topics, and leave all other decisions for the states and the people.

If you're increasingly worried about overreach from the Biden administration, you've come to the right place. Sign the petition below to join your fellow patriots in the fight for limited government, fiscal responsibility, and a Convention of States.