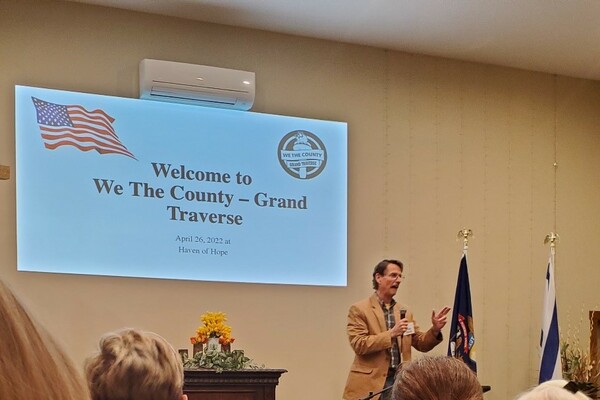 Convention of States (COS), Northern Michigan Regional Director, Bruce Finlayson along with several COS members met with the state and county level leaders of the We The County movement. We The County is a grassroots group organized on a county-by-county basis. They are looking for grassroots members in each county, people who are patriots. COS is affiliated with We The County on a statewide basis.

Last night, we had the opportunity to meet the originator of the We the County movement, Mike Smith, as he spoke with the Grand Traverse We the County membership. The audience included several people running for local offices, who incidentally have committed to guarding our constitution when elected. Mike Smith, who is a pastor, reminded us that we are patriots who need to band together to work toward restoring the government as it was designed and communicated in the U.S. Constitution.

The message was well received by the membership (almost 100) in attendance.  In fact, several attendees from other counties wanted to know how to get We The County organizations going in their home counties. Mike Smith agreed to help. Like us, he is a volunteer and is working to grow the organization in each county. Mike comes from Michigan's thumb region where there are five county organizations working together to identify candidates for various elected positions. They are currently running a billboard campaign with the theme of The Truth Will Prevail.

Also at the meeting were signups for election workers and inspectors, precinct delegates, and information about the school board and county commissioner elections.

The messages presented by We The County were supportive of the Convention of States mission and the COS representatives were warmly received.