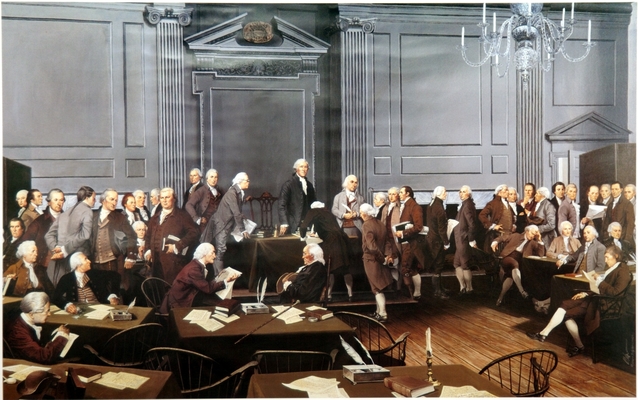 Over the course of my three years in support of an Article V State Convention to propose amendments, a regular fear expressed by Article V opponents is that the convention will conduct itself in the same Animal House atmosphere of our sorry US Congress. While no one can predict the future of such things with certainty, recent experience points to a different place, one where ladies and gentlemen firmly, yet decorously, stood to express the will of the state legislatures that commissioned them to restore the American republic.

I wouldn’t have bothered with this post had not 137 commissioners from fifty states convened this past September at Williamsburg in a simulated convention of the states. The great and feared red, blue, and purple divide that threatens to tear our nation asunder was . . . gone! Where was the runaway convention so feared by the John Birch Society and Eagle Forum? State commissioners rose to the occasion and conducted themselves as if the eye of history was actually upon them.

At the risk of being admonished here for posting excerpts from a ratifying convention and drawing comparisons from it to a still-to-happen state convention to propose amendments, I think the analogy is legitimate. Passions run high in any gathering of strong willed people; they must be restrained and directed toward productive work. That is the essence of the often demanding job description of those who lead conventions, their presidents.

Every organization takes on the character and demeanor of its leaders. From the parents of a family, to the CEO of a corporation, to the President of the United States, they all, for better or for worse, have great influence over their institutions. Here, I wish to highlight the psychological environments set up by convention presidents Edmund Pendleton at Virginia's ratifying convention in 1788, and Utah state representative Ken Ivory at Williamsburg in 2016.

Richmond 1788. Sixty-seven-year-old Edmund Pendleton thanked the convention for electing him, despite his known physical infirmities and decline in mental powers. He assured the delegates he would execute his duties to the best of his ability, so as to prevent any dishonor or inconvenience to the convention.

“Order and decorum in the deliberations of all public bodies is absolutely necessary, not only to preserve their dignity, but that reason and argument may have their proper effect in decision, and not be lost in confusion and disorder. You have made it my duty to be the centinel over order, and endeavors to preserve it shall not be wanting. But those will be wholly ineffectual, unless assisted by your example and support, which I shall therefore confidently hope for.”

He reminded the delegates that they were trustees for the citizens of Virginia, which required their most serious attention. Since they all had the same end in view, they should calmly reason with one another as friends. Strive to avoid all heats, intemperance, and personal altercations, which always impede and never assist fair investigation.

As the signers to the Declaration of Independence appealed to the “Supreme Judge of the World for the rectitude of (their) Intentions,” Edmund Pendleton hoped the Virginia Ratifying Convention may reasonably “stand justified in (its) decision, whatever it may be, to those we act for, God and The World.”

Williamsburg 2016. Convention president Ken Ivory of Utah thanked the assembled commissioners for the honor of electing him. Prior to the convention, he visited Monticello and Montpelier. Along with a few other commissioners, they sat in the room where James Madison drafted the Virginia Plan of Government, and took in the enormity of what took place there.

He compared our governing form to a near broken-down bicycle. In previous times, when it was maintained, it operated as designed. Today, the federal tire is so bloated that it may explode at any time, while the state tire is so flat that it’s about the chew the tire from the rim.

He invoked The Federalist #51, in which James Madison stressed separation of powers, structural checks and balances. In the machinery of the Framers’ system, the power of the sovereign people was divided into two spheres, like a bicycle’s two tires. When the machinery of a bicycle or government is near collapse, changing the rider or president is not a solution to the problem.

Representative Ivory said, “I would submit to you that the Founders, knowing like every good bicyclist that goes out for a long ride, you’re going to need a repair kit. You’re going to need tools and patch kits and pumps and a multi-tool, because they knew that there would need to be repair and maintenance on that system the more it was used. George Washington said, ‘We left the door open, we left the constitutional door open.’ And the constitutional tool they left is Article V. Article V of the Constitution is the multi-tool to repair and amend and maintain the system. Not personality, not policy. We have a system problem.”

Citing W. Edwards Deming, Rep Ivory said, “Every system is perfectly designed to achieve the results it gets.” Our system in disrepair is designed to achieve trillion-dollar a year deficits, $20 trillion in debt, 90,000 pages of regulation, 5,000 federal felonies. We also have a system designed to achieve the necessary repairs, and you all swore an oath, as you were intended to be constitutional officers, to work on the system. That’s you. That’s the people you represent. As I was walking from here to grab my binder after breakfast, someone that’s just staying in the hotel said, “What are you all doing here?” I said, “We’re Commissioners from every one of the states, here to exercise our oath to repair and maintain the system.” He said, “I’m so glad. I’m so glad. Please, do that job. We need it so badly.”

Upon the close of the simulated convention, New Mexico State Representative Yvette Herrell reported, “What I found amazing about the simulated convention was the commissioner’s dedication to the process. It was remarkable to witness the level of participation and the various conversations happening throughout the convention floor. We took our responsibilities as commissioners seriously, as if to collectively exhibit to the nation that Liberty is alive and well, that through the Article V process, state legislators can succeed in amending the Constitution in a way that is safe and meaningful. Above all else, we exemplified that fears of a runaway convention can finally be abandoned.”

We are the many; our oppressors are the few. Be proactive. Be a Re-Founder. Join Convention of States. Sign our COS Petition.

Click here to read more from the Article V Blog.