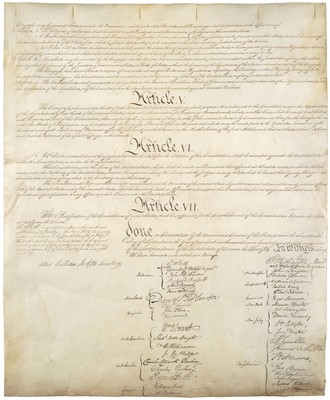 The following was written by Rita Dunaway, Esq., National Legislative Strategist for the Convention of States Project.

The constitutional boundaries separating the three federal branches and setting outer limits on their power are barely visible anymore. Many Americans are turning toward Article V of the Constitution to restore those boundaries.

Constitutional amendment is strong medicine, to be sure, but it is the medicine that our Founders prescribed for the disease of federal overreach that is otherwise terminal to our Republic.

Here are five myths about the Article V antidote and its side effects.

1. An Article V convention is a “Constitutional Convention” or “Con-Con.”

This point can get confusing, because Article V is a provision of the Constitution, so a convention held pursuant to its terms could be described as “constitutional” in that sense.

But what most people mean when they describe an Article V convention as a “Con-Con” is that it is the same type of gathering as the one in 1787 that produced our Constitution. And that implication is clearly wrong.

The distinction between the Philadelphia Convention of 1787 and a convention held pursuant to Article V lies in the source of authority for each. The states gathered in 1787 pursuant to their residual powers as individual sovereigns—not pursuant to any provision of the Articles of Confederation for proposing amendments.

An Article V convention, on the other hand, derives its authority from the terms of Article V itself and is therefore limited to proposing amendments to the Constitution we already have, pursuant to the prescribed procedures.

2. We have no idea how an Article V convention would operate.

Article V itself is silent as to the procedural details of a convention, leading some to speculate that we are left clueless as to how the meeting would function.

But while it’s true that there has never been an Article V convention, per se, the states have met in conventions at least 33 times. There is a clear precedent for how these meetings work. In fact, many of the Framers had attended one or more conventions, and the basic procedures were always the same.

3. The topic of an Article V convention cannot be limited, so convention delegates could re-write the entire Constitution once they assemble.

The reason we haven’t had one yet is because there have never been 34 applications requesting a convention on the same topic. Moreover, this proposition makes no sense from a historical, practical or legal perspective. In every interstate convention ever held, there was always a specified topic or agenda for the meeting.

Practically speaking, some limitation on the topic is necessary in order for the state legislatures to provide instructions to the delegates they send as their agents (states always instruct their delegates).

Anyone who has read James Madison’s record of the Philadelphia Convention proceedings knows that the very reason the drafters added the convention method of proposing amendments to Article V was to give the states a way to bypass Congress— which has its own, express power to unilaterally propose amendments.

They would never have given Congress control over both methods. Congress only has two powers related to the convention: to issue the formal call, setting the date and location of the convention once 34 similar applications are received, and to choose between two methods of state ratification for any proposals offered by the convention.

That’s it. In fact, at least one federal court has definitively ruled that Congress cannot use any of its Article I powers—including its power under the Necessary and Proper Clause— to affect Article V procedures.

5. The Article V convention process has no safeguards to protect our Constitution from rogue delegates or big-money special interest groups.

To the contrary, the process is so well-safeguarded that it has proven incredibly difficult to invoke! There are numerous, redundant safeguards on the process.

But the final and most effective protection of the process is the simple fact that it takes 38 states to ratify any amendment proposed by the convention. This means that it would only take 13 states to block any ill-conceived or illegitimately advocated proposal.

Article V’s convention process is part of the beautiful constitutional machinery built to protect the states and the people from an overreaching federal government.

It is time for us to use it.