I invite you to go to the Secretary of State's webpage to find a sample ballot for your ward.  Not only will you find the candidates listed, but also you will find 2 questions. You can also find samples at your town hall. 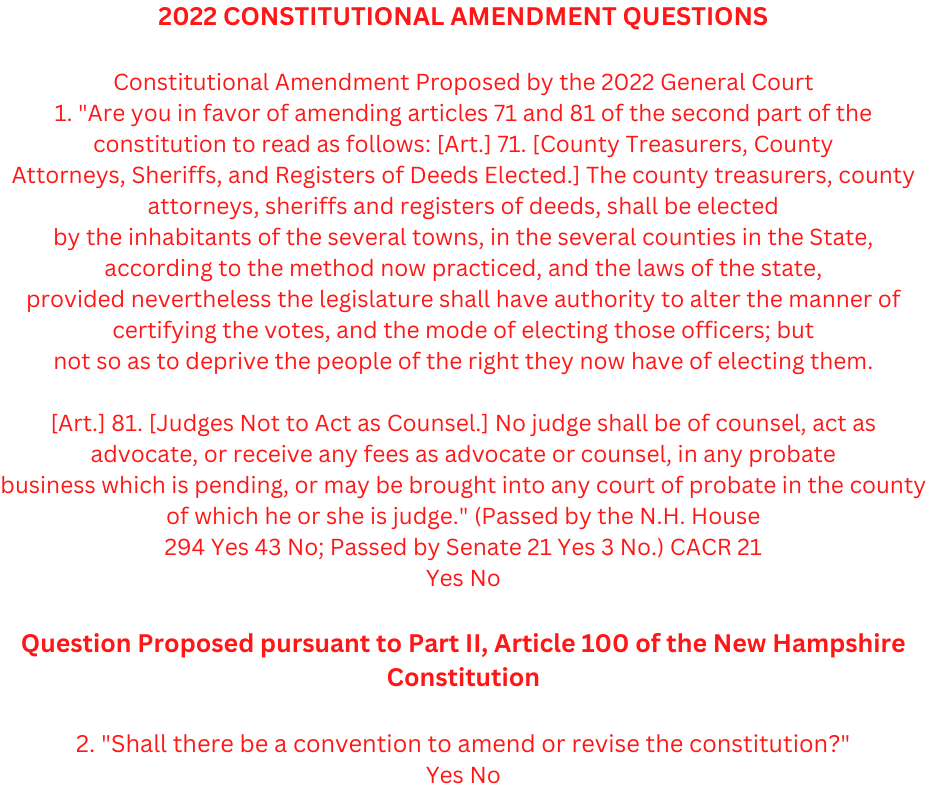 Notice how the 1st question tries to modify two Articles, Article 71 and Article 81 with one question?  Upon first glance,  a voter may want to vote one way for the first part and another for the second part, but are only given the opportunity to vote one way for both parts.  CACR 21 instructs the Secretary of State to create the ballot in this manner, as the goal was to remove the "Register of Probate" language in the two places. **Note- CACR 21 used Article 100, the first part, to propose a Constitutional change.

[Art.] 81. [Judges and Registers of Probate Not to Act as Counsel.] No Judge, or Register of Probate, shall be of counsel, act as advocate, or receive any fees as advocate or counsel, in any probate business which is pending, or may be brought into any Court of Probate in the county of which he is Judge or Register.
September 5, 1792

Click here to see the voter guide, which will also be provided at the polls.   Excerpt from the Voter Guide:

AT THE PRESENT TIME, the constitution references registers of probate while the office’s duties were redistributed to circuit court clerks in 2011.

IF THE AMENDMENT IS ADOPTED, the constitution will no longer include the reference to registers of probate.

Looking at the ballot with the House and Senate votes reported, it shows how our Legislators feel that the  Register of Probate is an "obsolete elected position." You can read more from the passed CACR 21.

Click here for the hearing notes. This testimony was helpful:

Currently, probate calls are taken by the call center and this process is successful.

Electronic filing resulted in the elimination of staff members and saved $60 million over 10 years.

As shown above in Article 71, "Amended 1877 adding registers of probate, county solicitors, and sheriffs to those to be elected." So apparently in 1877, the register of probate was important enough to be added as an elected position.

I am curious, who decided in 2011 to redistribute the Registers of Probate duties?  Who authorized the decision to take away work from elected officials?

Would a "call center" be a helpful resource for we the people or would a register of probate clerk who works at the location with the judges and knows how the system works be more helpful for we the people?

Hopefully, these links that I have provided will empower you to read and decide how you will vote on question one.

Question two: "Shall there be a convention to amend or revise the constitution? 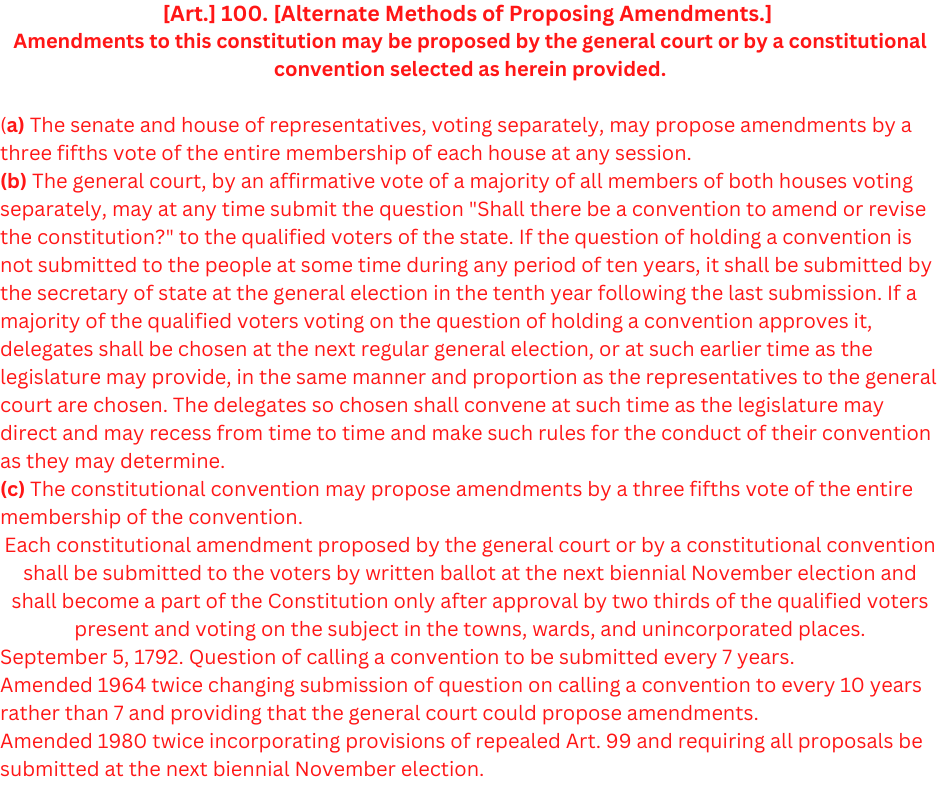 If NH were to want to have a NH Constitution amending convention, "we the people" could strengthen NH's structural issues. Let's compare Article 100 of NH's Constitution with Article V of US Constitution. 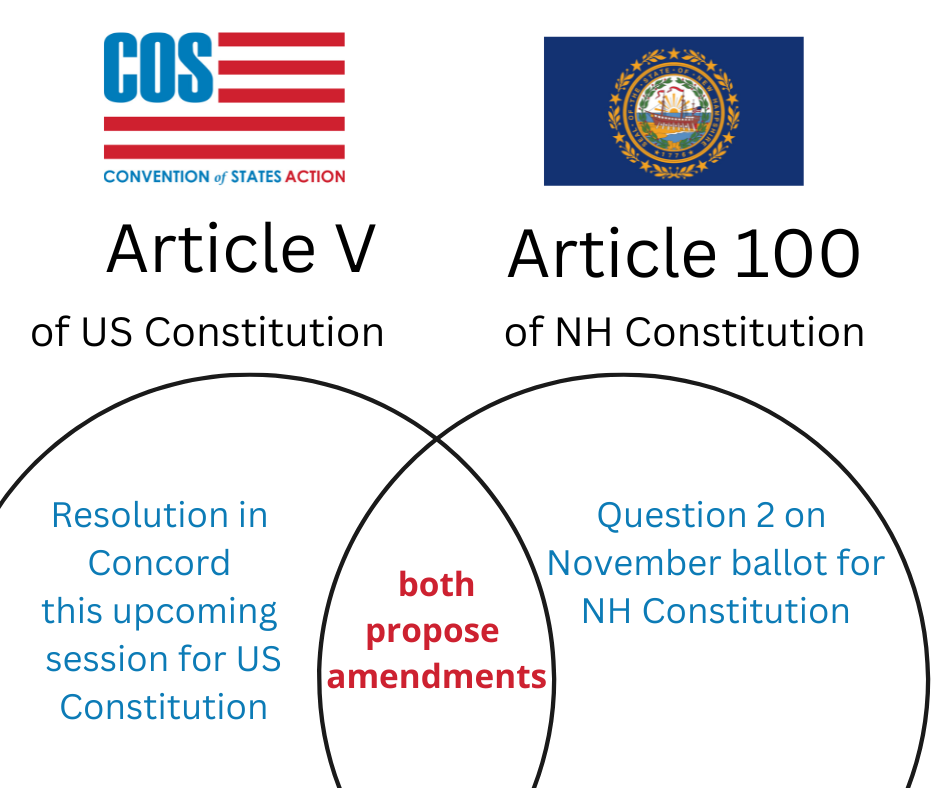 With both a Convention of States, the use of Article V of US Constitution, and NH's Article 100, the delegates are the ones who come up with the correct wording for any proposals.

NH elects the delegates at the next general election with NH's Article 100 (see part b under Article 100 above), whereas the Legislature gets to choose who is a delegate for a Convention of States when utilizing Article V of US Constitution.

In NH's Article 100, if 3/5th of the Delegates approve the wording at NH's proposing convention, then those proposals get on the next biennial November ballot. With a Convention of States, Article V of US Constitution,  a simple majority vote decides if the proposal goes back to the states to be ratified. 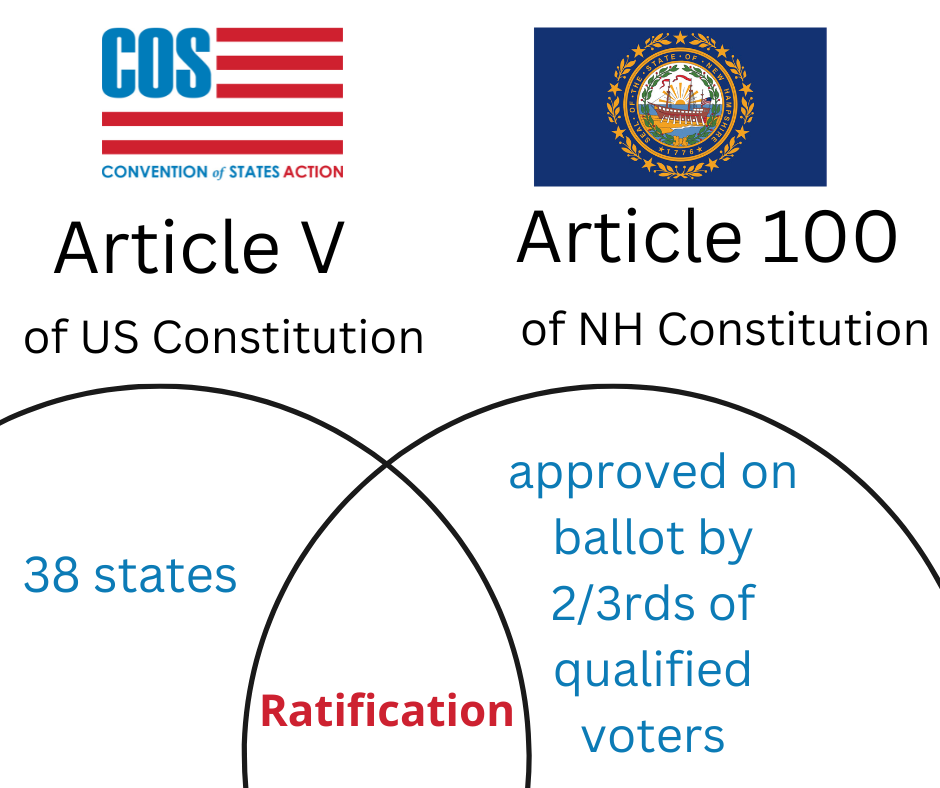 Here are some ideas to get you thinking if you would like to exercise your right to use Article 100 here in NH. The founders of NH's Constitution felt it necessary to insert this feature for "we the people's" benefit.  Again, the delegates elected would decide wording and topics.

For example, imagine proposing something like this, a solution to November's ballot confusion:

Like a Convention of States, we could propose term limits:

Adjudication, we could propose:

Finances, we could propose:

Structure, we could propose:

Bills in general, we could propose: (previously shared from from GraniteGrok here)

Updating NH's Bill of Rights, we could propose:

Education, we could propose:

As you can see, there are many structural supports that NH could benefit from with exercising the people's rights by using Article 100, just the like the Nation benefits from Article V of the US Constitution.

Both conventions only have the authority to PROPOSE amendments.

Please vote your values on BOTH sides of the ballot, bring your photo ID, and invite your neighbors to do the same on November 8, 2022!