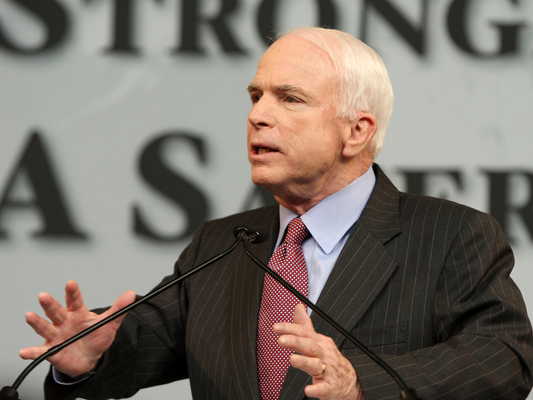 More than half a million dollars for a film about Mickey Mouse, $5,000 to study Hello Kitty, and more than $50,000 getting birds drunk are just a few examples of taxpayer-funded projects exposed by Sen. John McCain (R., Ariz.) in his latest book on government waste.

The Washington Free Beacon exclusively obtained a copy of McCain’s fourth edition of America’s Most Wasted, set for public release Wednesday. The report chronicles more than $27 billion in wasteful spending that ranges from billions in handouts to Hollywood, horseracing, and the wind industry, to $15,000 for a movie about hula dancing.

A main target for McCain was the National Science Foundation, which spent $872,164 to study how children cross the street. The results found that children tend to take greater risks when crossing the street compared to adults, “something generations of American parents already knew,” the report said.

Another project by the agency cost $10,960 to study old male hunting dogs in Nicaragua. The results found that older dogs were more successful hunters than younger dogs and that “dogs that are not good hunters are almost never taken on excursions.”

The National Science Foundation was not the only government agency to engage in questionable research. The Department of Education shelled out $5,000 to study Japanese cartoon character Hello Kitty.

The funding went towards research for a book by Christine R. Yano, an anthropologist, called Pink Globalization: Hello Kitty’s Trek Across the Pacific. Yano attributed Hello Kitty’s popularity to the “blankness of her design.”

“You can give her a guitar, you can put her on stage, you can portray her as-is,” she said. “That blankness gives her an appeal to so many types of people.”

The National Institutes of Health spent $51,326 to see whether birds sing differently when they are wasted.

“The researchers gave Zebra finches grape juice spiked with ethanol and examined whether drinking the spiked juice altered the birds’ ability to sing in tune,” the report said.

The article lists a number of additional, equally ridiculous examples, which you can read here.

What it doesn't mention is how to solve the problem of government waste. Fortunately, the Founders already addressed it over 200 years ago in Article V of the Constitution. Article V allows the people -- acting through their state legislatures -- to call a Convention of States that can, among other things, propose constitutional amendments that force the federal government to be fiscally responsible. Sound good? You can learn more here.