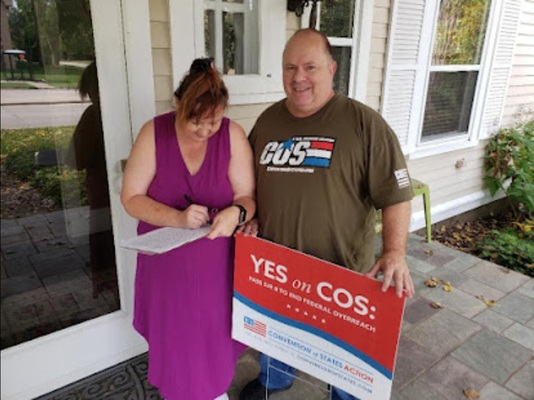 When one thinks of seasons, summer, fall, winter or spring come to mind. Alternatively there are the holiday seasons: Memorial Day and the 4th of July, among others.

But there is an additional season which many of us have come to dread: election season. We are entering this season now for the 2022 election cycle and another will appear in two more years and so on.

Election seasons have taken an unprecedented importance in the last 20 years with each season becoming more and more critical. Although past candidates frequently declare each cycle the most important in our lives, this is now the reality.

The United States is on the verge of dissolution or collapse. This is not hyperbole. Every one of our institutions has been undermined by an ideology which has destroyed one of the major political parties, taking it over in order to establish a one-party rule state.

While the cooptation of the Democrat party by militant factions is the gravest threat facing us today, the opposition party shouldn’t be given a pass for its failures in leadership contributing to the ever increasing problems facing our nation today.

The fact is, "that government is best which governs the least," attributed to Thomas Jefferson, is a truism.

Paul Bartow, a Wheaton College graduate and Ph.D. student at the University of South Carolina, wrote in the Federalist on January 27, 2017:

"The last intellectual legacy of the founders that merits reaffirmation today is the belief in federalism and subsidiarity. The founders believed that sovereignty was ultimately derived from the people. This meant that the essential duties of government are most effectively executed when concentrated at the most local level possible. Local governance was best precisely because it empowered people to conduct politics on a personal level with others ..."

Both political parties have failed their constituents in various ways. Moreover, each party has increased the size and scope of government to levels arguably unimaginable to the Founders.

Convention of States (COS) seeks "to bring power back to the states and the people, where it belongs."

"Article V of the U.S. Constitution gives states the power to call a Convention of States to propose amendments."

Candidates running for office use a technique that proves highly successful. According to some studies, canvassing, the technical term for block walking, "shows that canvassing door-to-door increased voter turnout by 6%." COS employs similar methods.

Andrew Barkman is the National Block Walk Coordinator for COS. Recently we sent Andrew a series of questions about his thoughts and experiences regarding block walking, some edits were necessary for continuity:

Question: Describe how you got involved in COS and how you became National Block Walk Director.

Andrew: I Watched the PragerU COS video and signed the petition in 2017. I Block Walked with another group until the 2018 election and then joined as a District Captain (DC).

In my time as a DC, I saw how block walking would be useful to COS and kept talking with various people about it.

Following the mass tech censorship in 2021, I reached out to all the people I’d spoken with over the previous years and pushed to create the program with one goal: To have a method to get our message out that wasn’t dependent on Big Tech.

Question:  Block walking is traditionally associated with election Get Out The Vote (GOTV). How is COS block walking different?

Andrew: In GOTV you usually only talk to voters leading up to an election. We talk to any of our neighbors about self-governance. We can talk to people in a non-election year, and we go out in groups and to houses in teams of at least 2 but no more than 3.

Question:  According to marketer Ciara O Riordan at ECanvasser.com, "a truly successful field canvass depends on the number of relevant conversations on the doorsteps, not the number of doors knocked. Studies of the 2004 US Presidential campaign showed that the quality of the canvass was far more important than the number of canvasses."

Moreover, according to a study published in Cambridge University Press  in December 2016, there is some evidence in Europe that canvassing may be less successful because of the nature of their political systems. For example, "it is possible to have more relevant and engaging discussions about the character of individual candidates, whereas in countries like Denmark discussions would have to be more abstract and focus on parties."

How is COS sold as an abstract idea?

Andrew: Well, we don’t really try to sell anything. We introduce ourselves and explain what we are doing. We ask if they agree there should be term limits etc. People either like it or they don’t. We are lucky that 80-90% of the people we speak with have a positive response to our message.

Question: Are candidates ever referenced in COS block walking?

But, volunteers who have learned this skill can use it, separate from COS, to help any candidate they wish.

The bigger picture is to grow the grassroots army. Block walking does that by communicating the message to people who have not heard it and giving people a way to actually participate in the movement quickly and with a minimal amount of training.

Question: Several online articles mention a number of characteristics such as establishing trust, or bringing energy, making it personal, tangible, or creating peace of mind as important or successful qualities in any personal engagement.

How do you evaluate success?

Andrew: Yes, being polite and friendly definitely help. We measure many things. The big one to me is how many people have learned to block walk, as there is an ever-increasing number of people becoming active. Active participation is part of self governance.

Question: Have any measures been taken as to effectiveness?

Andrew: Again, same answer as above; many people have learned to block walk and there is an ever-increasing number of people becoming active.

Question: When the presentation is finished, what is the "call to action?"

Andrew: Usually the call to action is to sign the petition and volunteer if you want to see this idea become reality.

Question: Do you employ any technology?

Andrew: Our captains use email, phone calls, texting, computers for maps and to enter data, and more. But for most block walkers they just need to show up. We do not usually use apps in the field as that gets back to GOTV where you skip houses. We want to engage anyone, who is willing, in a conversation about self-governance and saving our great nation.

Question: What is the best engagement story you have?

Andrew: One of our volunteers got a lady excited about COS and she said "I’m going to see the legislator at the pool later and tell them they need to support this." We got word back later that they were now a supporter.

Question: And what is a worst story?

Andrew: Sometimes people love COS so much they feel the need to convert opponents at the door. We had one volunteer take 30-45 minutes with an opponent out of the maybe 2 hours we had to reach people that day. We teach people to just move on and find that 80-90% of people who agree with us. There are people willing to sign and volunteer but they just haven’t heard about it yet. Let’s go talk to those people.

Andrew: The more we get the vision of block walking as a tool to let new people take their first step in activism, the more of them will take their second step and so on. Let’s get active instead of passive, and let’s invite new people to join us as we save our country.

Thanks to Andrew Barkman for his time and efforts.