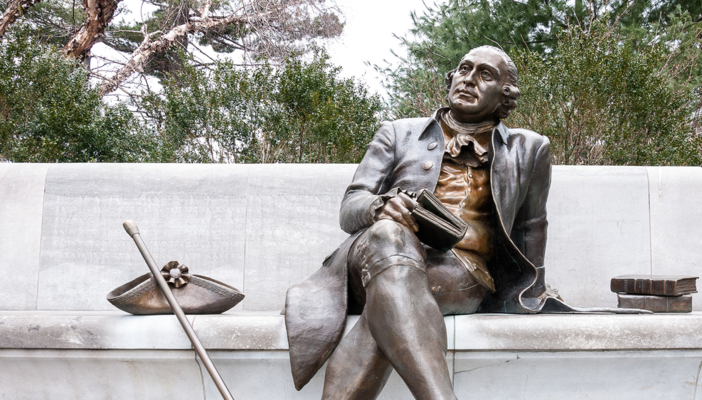 October marked 225 years since the 1792 passing of one of Virginia’s greatest statesmen, Colonel George Mason. Instrumental in many of the liberties we have today, Col. Mason influenced much of the latter half of the 18th century.

How can we heed his call to action?

In 1774, Mason wrote, “Taxation and Representation are in their Nature inseparable.” Today we know that phrase as, “No taxation without representation.”

At the Virginia Convention in May 1776, Mason drafted the Virginia Declaration of Rights which opens with the revolutionary words:

“That all men are by nature equally free and independent, and have certain inherent rights…”
“That all power is vested in, and consequently derived from, the people…”
“That government is, or ought to be, instituted for the common benefit, protection, and security of the people…”

Mason then proceeded to write the Virginia Constitution, followed by designing the Great Seal of the Commonwealth of Virginia.

Of this work Thomas Jefferson said, “The fact is unquestionable, that the Bill of Rights and the Constitution of Virginia were drawn originally by George Mason, one of our really great men, and of the first order of greatness.”

Most notably, Convention of States Project recognizes Mason’s stand on September 15, 1787, when he declared that the sole means of amending the Constitution by Congress, as described in Article V, was both “exceptionable and dangerous.”

Col. Mason urged his fellow delegates there needed to be a way for We the People to propose constitutional reforms for that day when the federal government would inevitably “become oppressive.”

After months of debate, this one item was agreed upon without any opposition.

Where would our liberties be today, without Mason’s commitment to service? In the 18th century, those in government served not for self-aggrandizement, but out of loyalty to their fellow citizens.

Those in Virginia government were landed gentry. Their position in society required duty, despite their own personal tug of yearning to remain at home. Service to the people was uppermost in the minds of those in government at this time in history. George Mason exemplified this in every facet of his political writings.

Through it all, Mason sacrificed through constant physical pain. He suffered much from various physical ailments throughout most of his life. Whether it was gout, headaches, sore eyes, or various other “ill State[s] of Health,” traveling on the rough roads of that day, by horse or carriage, was excruciating and often avoided.

Nevertheless, Mason’s commitment to service helped him to persevere despite the pain. Liberty was at stake. Opportunity had come. The time was now. Over and again we see how this has borne fruit in his many legal writings, always remembering “that all men are by nature equally free and independent.”

Those of us who volunteer with Convention of States are inspired by our Framers, like George Mason.

Keeping the republic is at stake. The time is now. Click here to join our team.