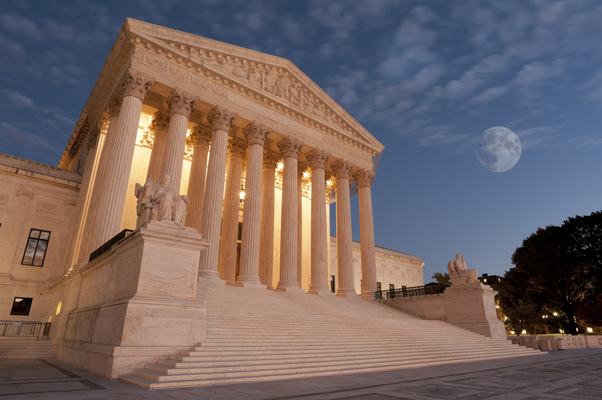 The Supreme Court has ruled. The Court—not the Constitution—has legalized same sex marriage. No one can legitimately contend to the contrary. This occurs one day after the Court rewrote the Obamacare legislation to save it from a pragmatic death.

The political nature of the Supreme Court was emphasized by President Obama’s stern warnings in advance of the Obamacare decision.

The Court’s decision in the marriage case directly overrides the popular vote of 32 states which put traditional marriage provisions into their state constitutions and laws. Five justices have imposed their will on millions of voters.

Why do we do this? Why do we allow unelected judges to make political decisions — including many of the most important decisions of our era? Abortion and now same-sex marriage have both ripped our country apart. On both of these issues, if it had not been for Supreme Court intervention, the law would vary from state to state as the people of the state desired.

The Supreme Court’s misuse of power is a long and intractable problem. In FDR’s era, the Court systematically overruled the New Deal legislation as unconstitutional violations of the right of contract. Legal scholars and the current Supreme Court all agree that during this era the Court was substituting its political judgment for that of the legislators chosen by the people.

It is the same today. The majority justices are not just foisting Obamacare or same-sex marriage on us. The Supreme Court of the United States is systematically denying the American people the right of self-government. We have the right to elect the legislators who make our law.

FDR’s solution to this problem was to limit the power of the individual justices by his famous court-packing scheme. He would increase the number of seats on the Supreme Court—they were old and over-worked and needed help. Armed with new appointments to make, FDR could remake the Court in his own image to achieve his desired political results.

Our solution today requires this same general approach. We have to figure out a way to beat the judicial politicians with superior political tactics.

The core reason that the Supreme Court has this much power is revealed by the Court itself. In multiple opinions, usually in dissents, the members of the Court have acknowledged that there is no realistic check on the power of the Court other than its own internal sense of self-restraint.

If we want to preserve American self-government, we must impose additional restrictions on the power of the Supreme Court. Checks and balances need to be real, not merely theoretical.

There are many ideas in circulation on how to do this. Term limits could be imposed on the justices. We could add “deliberate failure to follow the original meaning of the Constitution” as grounds for impeachment. We could give the power of impeachment to state legislatures.

My favorite is to follow FDR’s court-packing idea but with vigor. Every state should be allowed to appoint a member of the Supreme Court. They could serve for a brief term, perhaps eight years. Removing Supreme Court appointments and confirmations from Washington, DC, is the only realistic way to ensure true judicial independence. Otherwise, you get the power cabal that we have in place which was clearly in play in this week’s Obamacare decision. If Congress messes up, don’t worry, the Supreme Court has got your back to preserve the relentless march towards the centralization of power.

Of course, all of these changes will require a constitutional amendment. And it would be naïve in the extreme to believe that Congress would propose an amendment to take away the power of their partners in power aggregation.

The only way these kind of changes can be made is through an Article V Convention of States. The Founders told us that there would come a day when the federal government would abuse its power. When that day arose, the States needed the ability to rein in the abuse of federal power by constitutional means.

That day is upon us. Four states have already passed applications for a Convention of States that addresses the Supreme Court and other abuses of federal power.

It is time for the other states to pick up the pace and take back American self-government.

Click here to read this article in its original location on The Daily Caller.