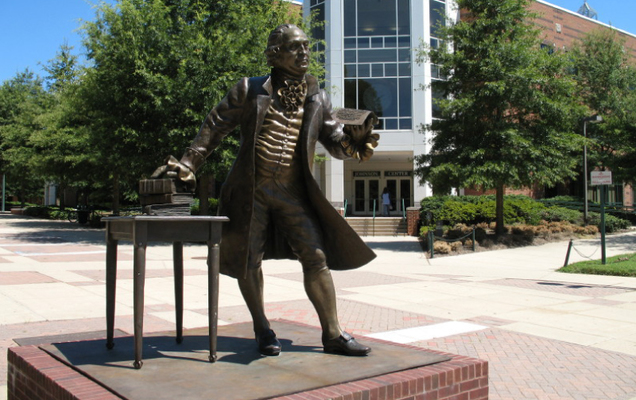 Permit me to share a very Important Constitutional history lesson with you. The delegates to the Philadelphia Convention (today referred to as the Constitutional Convention) had been going over every section of every article in the final months of the Convention in 1787. 228 years ago, on a Saturday, just two days before the Convention in Philadelphia completed its work, we find a gem in the notes of James Madison, who took extensive notes just about every day of the convention. This item that I refer to as a “gem” is little known and hardly talked about today.

On September 15, 1787, George Mason of Virginia (referred to in Madison’s notes as Col Mason), was alarmed that in the text of Article V (the provision for making Amendments to the Constitution), Congress would have sole power to propose amendments; Mason insisted, as he did earlier in June, that the states have authority to call for conventions. Mason explained that an oppressive Congress would never agree to propose amendments necessary to restrain a rogue, tyrannical legislature.

“Col: MASON thought the plan of amending the Constitution exceptionable & dangerous. As the proposing of amendments is in both the modes to depend, in the first immediately, in the second, ultimately, on Congress, no amendments of the proper kind would ever be obtained by the people, if the Government should become oppressive, as he verily believed would be the case.” (See Madison’s notes 15 Sep 1787).

To make sense of that, you must understand that earlier in the summer when the issue of even having an Amendment process was first brought up as a provision in the Constitution, many of the delegates thought it unnecessary. Madison’s notes record the following on June 11th: “Col. MASON urged the necessity of such a provision [Amendments]. The plan now to be formed will certainly be defective, as the Confederation has been found on trial to be. Amendments therefore will be necessary, and it will be better to provide for them, in an easy, regular and Constitutional way than to trust to chance and violence. It would be improper to require the consent of the Natl. Legislature, because they may abuse their power, and refuse their consent on that very account…”.

By the time the convention reached its final days in mid September, the Amendment provision had been added as Article V, and the provision had two methods; the national legislature (Congress) could propose Amendments and Congress could call for a Convention of States for the purpose of proposing amendments.

However, both methods were left in the hands (power) of the national legislature, that’s what Mason meant when he referred in the first quote above as “both the modes to depend, in the first immediately, in the second, ultimately, on Congress”. Mason had objected to this back in June and now as the convention drew to a close, he rose to his feet to forcefully object with his reasons stated above (“It would be improper to require the consent of the Natl. Legislature, because they may abuse their power, and refuse their consent on that very account”). Madison’s notes of 15 Sept tell us that Mason’s motion was accepted and the language was changed in order to require [mandate] Congress to call a convention upon application of 2/3 of the states.

It is noteworthy to point out that this process does not call for a Constitutional Convention; the language specifies calling a convention for the purpose of “proposing amendments”…to the existing Constitution…it would still require 3/4ths of the states (38) to ratify any amendment proposed in this convention.

We owe George Mason and the other framers a huge debt for this...they had the foresight to understand first of all, that we needed an orderly process in which to amend our Constitution (“regular and Constitutional way than to trust to chance and violence” – Mason 11 June).

Secondly we owe them a huge debt for recognizing and understanding the depravity of man and the extremely intoxicating effects of years of power in the hands of the same people (hence a need for term limits) and that these power intoxicated occupants of the United States Congress would “abuse their power, and refuse their consent” (Mason 11 June) to any amendments that would “injure” themselves and return powers never intended for the national legislature or any of the other branches for that matter, they would never take steps to return that power on their own to the rightful owner, the states/people (“no amendments of the proper kind would ever be obtained by the people, if the Government should become oppressive” – Mason 15 Sep).

The least we can do as citizens of this great nation today, citizens that do not seem to want to be bothered with taking the time to understand the underpinnings of their liberty, the least we can do is take the time to understand what the framers of this amazing document did for us. When the framers agreed on September 15th, 1787 to change the text in Article V, they in effect were telegraphing a message to us in 2015, a message to us showing us the way back inside the fence of the Constitution, a way back to what Thomas Jefferson called the “chains of the Constitution.”

Bob Menges is the South Carolina State Director for the Convention of States Project. Find more articles at towardsarenewedmind.blogspot.com.