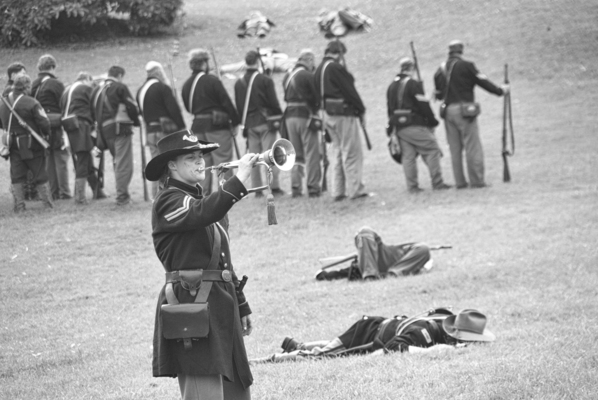 In July of 1862, while the Union Army was stalled at Harrison’s Landing, Virginia, in their attempt to capture Richmond, Virginia, it was not advised to salute fallen soldiers with a volley of rifle fire because the other side might think the enemy is attacking. Every evening, the soldiers were signaled by bugle call, that it was time to turn in for the night, also known as Tattoo. In the earlier days, the song played was known as "Scott’s Tattoo," named after General Winfield Scott.

General Butterfield did not like the music. He thought it was too formal. The Brigade’s bugler, Oliver Wilcox Norton, a private with the 83rd Pennsylvania Volunteer Infantry, was summoned to the General’s tent. Gen. Daniel Butterfield could not read or write music but he did not like the current bugle call.

Together, Pvt. Norton and General Butterfield modified "Scott’s Tattoo," changing some of the notes and lengthening notes until Taps became the tune we all know today. That night in 1862, the new Taps was played for a Union artilleryman who had died on the battlefield. In the ensuing days, buglers from other units came to General Butterfield's encampment wanting the music to the new bugle call.

Within 9 months, Taps was played by the Union and Confederate armies when soldiers fell in battle and were buried. As the tune became famous, it was accepted in 1891 by the military to play every evening on bases all around the world signaling lights out (Tattoo) and at military funerals to mourn those who died in battle as well as veterans who have died.