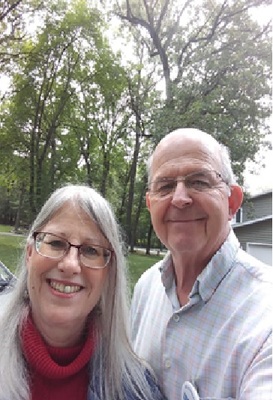 Laurie and Steve Christianson spent the 20th Anniversary of 9-11 working to improve America.

Laurie observed, “What a beautiful morning to Blockwalk!” and she was right! September is a fantastic time to be outdoors in Wisconsin’s “Great up North.”

“We enjoyed our walk and expanded our sphere of influence. With a suggestion for Convention of States to tame the monster called the Federal Government,” Laurie said.

Blockwalking the Convention of States way is easy, simple and very effective. It is knocking on your neighbor's door and asking a few very simple questions:

2. Budget - Do you think Congress should stay within its budget?

3. Decisions - Would you prefer decisions be made closer to home or by        people far away?

Laurie and her husband, Steve, blockwalked the Woodland Terrance area of Menomonie Wisconsin. She said, "We met some concerned citizens that agree in Term Limits, Balanced Budget and Decisions being made closer to home. We knocked on 12 doors, talked to 6 people. One of them is on the Board of Supervisors for Dunn County. He gladly signed the petition along with his friend. He added 'Keep fighting the good fight!'"

This is one of the many benefits of blockwalking. We can choose the area we work. We can blockwalk a legislator’s neighborhood and influence them by influencing their neighbors. They will hear about it.

Other reasons to blockwalk are that anyone can do it. It is easy to learn and very convenient. A perfect fit for Convention of States Supporters, which are folks that have signed the petition but have not (yet) volunteered.
Badgers are naturally very wary. We often want to research something prior to signing anything. Which is wonderful. Laurie and Steve made several people aware of Convention of States, and left a brochure, which gave them the opportunity to look into it and conduct their own research. This often sells them on Convention of States.

If someone was not home, Laurie and Steve left a leave behind stuck in the door. It is a Federal Crime to leave non-mail in a mailbox.  It is important to be careful and know the do’s and don’ts.

Convention of States has produced a class called “Blockwalking Best Practices.” It is in the Introductory Class section of COS University and is only 5 minutes long. It is ”Vol 100 Introduction to Volunteering” in COS University. To see the class, click on the box “View All Course Offerings.”

You can always get to COS University by clicking on the “Take Action” hyper link on the Convention of States website or by going directly to this link.

How to Build a Blockwalking Team

Laurie said, “Next Saturday the plan is to gather a group to hit another section of Woodland Terrance” in Menominee, Wisconsin. Wow! These are the words of a Patriot!

Convention of States has created a COS University Class to help organize manage the Blockwaking process. It is in the Leadership section of COS University. If you are not a leader call Art Binhack at 262-930-1677 for more information.

If you are a Leader you will be able to see the class when you sign into COS University and click the box “View All Course Offerings.” The class is entitled “Vol 200 Blockwalking,” and it takes less than 31 minutes to view it. It gives you all the tools to engage your neighbors.

Let Art Binhack at 262-930-1677 know about your interest. There are probably others in your area that think like you do, and want to blockwalk with you.