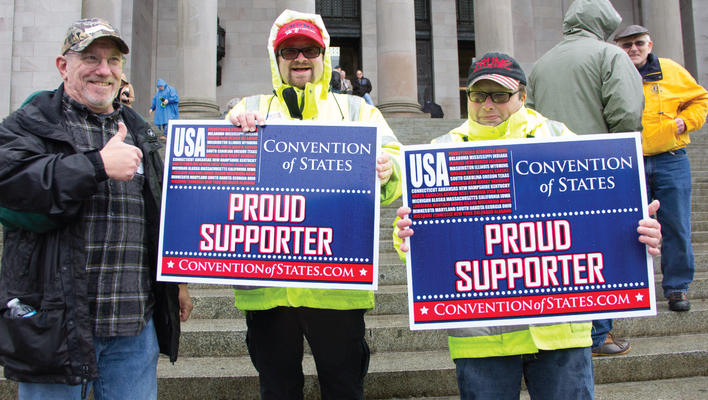 The following excerpt was written by Matthew Vadum and originally published on Capital Research Center.

America is a mess. No matter who is in power, the government of the United States keeps getting bigger and less accountable to those it is supposed to serve. Elections, some opine, are largely meaningless. The nation’s unpitying drift to the Left and to increasingly centralized, sclerotic, Western European-style governance with its cradle-to-grave welfare states seems unstoppable. To patriots—that is, to people who support limited government, individual rights, fiscal responsibility, and the rule of law, the future seems bleak.

It was never supposed to be this way.

The Constitution was supposed to protect Americans from what its principal architect, James Madison, termed in Federalist 48 an “ELECTIVE DESPOTISM,” spelling the phrase in all-caps so it screamed out from the page.

Today some observers fear we’re sliding into just what Madison hoped to avoid. “The Statists have been successful in their century-long march to disfigure and mangle the constitutional order and undo the social compact,” author, broadcaster, and Landmark Legal Foundation president Mark Levin writes in his 2013 book, The Liberty Amendments.

“The nation has entered an age of post-constitutional soft tyranny,” he writes (italics in original). To explain the concept of “soft tyranny,” Levin quotes that great observer of American society, Alexis de Tocqueville, who warned in his classic study Democracy in America (1835) that a declining United States could produce a new kind of petty tyranny never before seen:

It covers the surface of society with a network of small complicated rules, minute and uniform, through which the most original minds and the most energetic characters cannot penetrate, to rise above the crowd. The will of man is not shattered, but softened, bent, and guided; men are seldom forced by it to act, but they are constantly restrained from acting. Such a power does not destroy, but it prevents existence; it does not tyrannize, but it compresses, enervates, extinguishes, and stupefies a people, till each nation is reduced to nothing better than a flock of timid and industrious animals, of which the government is the shepherd.

Social engineering and central planning are imposed without end, since the governing masterminds, drunk with their own conceit and pomposity, have wild imaginations and infinite ideas for reshaping society and molding man’s nature in search of the ever-elusive utopian paradise. Their clumsy experiments and infantile pursuits are not measured against any rational standard. Their piousness and sanctimony are justification enough.

Congress is out of control, Levin writes, operating “not as the Framers intended, but in the shadows, where it dreams up its most notorious and oppressive laws, coming into the light only to trumpet the genius and earnestness of its goings-on and to enable members to cast their votes.” Anyone who watches C-SPAN, with its gavel-to-gavel coverage of fat-cat elected officials endlessly congratulating themselves for their selfless public service, knows this is true.

Congress unconstitutionally delegates its powers to “a gigantic yet ever-growing administrative state that, in turn, unleashes on society myriad regulations and rules at such a rapid rate the people cannot possibly know of them, either—and if, by chance, they do, they cannot possibly comprehend them.”

What was supposed “to be a relatively innocuous federal government, operating from a defined enumeration of specific grants of power, has become an ever-present and unaccountable force. It is the nation’s largest creditor, debtor, lender, employer, consumer, contractor, grantor, property owner, tenant, insurer, health-care provider, and pension guarantor.”

The federal government lords over both the states that came together in 1776 to form the United States and also those that were subsequently admitted to the Union. It routinely impinges on and overrules states’ “rights”—a misnomer because they are actually powers—interfering in the lives of the people of those states.

The states’ enfeeblement is reflected in the way no one calls this now grammatically singular sovereign entity these United States anymore. It is always the United States today. The states are treated as afterthoughts.

This goes against the intentions of the Framers, who “rightly insisted on preserving the prominent governing role of the state legislatures as a crucial mechanism to containing the power” of the federal government, Levin writes. “In fact, other than the limited, specified powers granted to the federal government, the states retained for themselves plenary governing authority.”

In Federalist 45 Madison argued, “The powers delegated by the proposed Constitution to the federal government are few and defined. Those which are to remain in the State governments are numerous and indefinite.”

States, Levin admits, are not “perfect governing institutions.” Many “are no more respectful of unalienable rights than is the federal government,” but the Framers intended that the states retain for themselves “significant authority to ensure the republic’s durability.” The Constitution aimed to diversify authority “with a combination of governing checks, balances, and divisions, intended to prevent the concentration of unbridled power in the hands of a relative few imperfect people.”

Over time, various government-limiting mechanisms in the Constitution that were intended as vital elements in the self-correcting American system fell into disfavor and disuse. As the republic aged, each successive generation cared slightly less about the contents of the Constitution, especially the parts that limited governmental power. Eventually, thanks largely to leftists, we reached a point at which Americans stopped being taught civics almost altogether, and interest in constitutional provisions came to be viewed as a quaint, anachronistic waste of time, like the false science of alchemy. The Left’s relentless push for government-provided security has over time eroded the support that many Americans feel for liberties and rights that the Founders took for granted.

Drastic change is needed. The American people agree. This is why they elected to the White House a flamboyant, eccentric political novice who promised bold reforms. They want the Washington, D.C. “swamp” drained. They’re fed up and for good reason.

As America moves farther and farther from her founding principles, elections don’t count for much. “We keep changing personnel and hoping it will fix the problem but the problem is structural,” says Mark Meckler, president of Citizens for Self-Governance, the parent organization of the Convention of States Project.

“So if we put good people in, we still get bad results. We have a fiscal house that is a disaster. The federal government is out of control. It will never rein itself in.”

The fact that the federal government’s books are fiction doesn’t help. “There is nothing real about government accounting,” says Meckler. “We need a constitutional amendment to impose generally accepted accounting principles on the feds.

Even when spending cuts are promised, overall federal spending continues on its upward trajectory because Official Washington operates in the make-believe world of “baseline budgeting.” According to this perverse method of accounting, both a cut and an increase may count as cuts.

Confused? You’re supposed to be.

Baseline budgeting allows politicians to pretend to reduce expenditures while they actually boost expenditures. As Citizens Against Government Waste explains, in D.C. jargon, “The baseline includes automatic adjustments for inflation and anticipated increases in program participation. Baseline, or current services, budgeting, therefore builds automatic, future spending increases into Congress’s budgetary forecasts.” So, if the federal budget is slated under the rules of baseline budgeting to rise by, say, $1 trillion, but it rises only $750 billion, the Congressional Budget Office will claim the budget has been “cut” by $250 billion. The “cut” is really just a reduction in projected spending.

When I was a reporter in the D.C. bureau of The Bond Buyer newspaper, I regularly had run-ins with analysts at the left-wing Center on Budget and Policy Priorities (CBPP). An article I wrote in 2004 illustrates the cognitive dissonance that some Washingtonians can achieve. At that time President Bush proposed appropriating $16.9 billion in Section 8 housing voucher subsidies for fiscal 2005, which was higher than the $16.4 billion appropriated the previous year.

A sane person would look at the two figures and conclude that $16.9 billion was $500 million more than $16.4 billion. But the leftists at the CBPP argued that after taking into account inflation and other factors, the $16.9 billion would be a funding cut. Instead of being honest and saying that they believed the $500 million wasn’t enough of an increase, CBPP analysts lied, claiming the increase was a cut.

Official Washington radiates this kind of entitlement mentality, and that ugly sentiment shows no signs of abating. Unless, perhaps, a state-initiated constitutional convention takes place that fundamentally changes the way federal officials view your tax dollars.

Amendments to the Constitution have been relatively rare, and a state-convened convention to propose amendments has never occurred, yet the Constitution itself allows for such drastic adjustments, and many sober jurists and statesmen have argued that the amending process can help if the nation begins to become disordered. Consider, for example, the views of Justice Joseph Story (1779-1845), a Supreme Court justice best known for writing the opinion in the Amistad case that Steven Spielberg immortalized in his movie of the same name. Story was also the author of the magisterial Commentaries on the Constitution (1833) and the son of a Boston Tea Partier.

Click here to read more from the Capital Research Center.