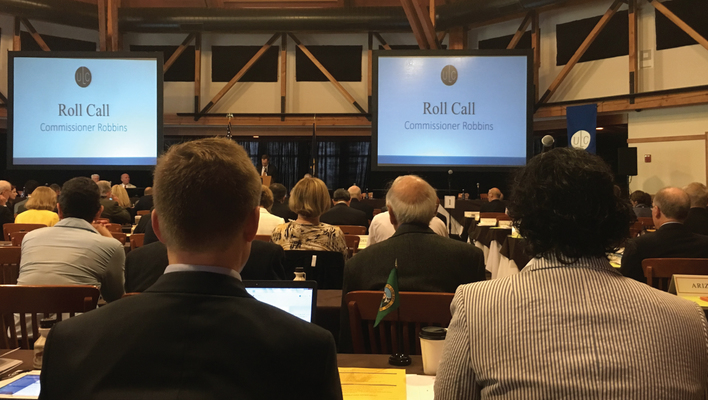 For decades fearmongers and naysayers have been claiming that the 1787 Constitutional Convention was a “runaway” convention and therefore if an Article V convention for proposing amendments were held today that it would “run away” also.

Leading Article V scholar Professor Robert Natelson has discovered and researched over thirty multi-colony and multi-state conventions, proving that the process of States convening to address critical issues was a well-established practice (Founding Era Conventions and the Meaning of the Constitution’s “Convention for Proposing Amendments”). Moreover, the procedures at the conventions were incredibly uniform: each state is represented by “commissioners” appointed in a manner determined by the state legislature, commissioners had no authority to act outside the scope of their commission, each state had one vote regardless of its population or how many commissioners it sent.  Not a single one of these thirty-plus conventions “ran away.”

Still the naysayers persist and claim that times have changed and a convention could never be held in today’s partisan political climate without running away and destroying our Constitution. Reality, however, paints a different picture.  In fact, the states have been meeting together every single year since 1892 (except 1945) to propose laws through the Uniform Law Commission (ULC, also known as the National Conference of Commissioners on Uniform State Laws).

Few people are familiar with the Uniform Law Commission, but almost everyone benefits from their work—in fact, anyone who has ever purchased goods from a seller in another state has been the beneficiary of laws drafted by the ULC.  The states created the ULC as a way to promote federalism and exercise their Tenth Amendment powers.  The states recognized that the Tenth Amendment gave them great power to shape the development of American society, but they also realized that with that power came certain dangers.  The reservation of certain powers to the states meant that the states could enact different laws on the same subjects creating all kinds of a confusion and difficulty for people dealing with multiple states.1 Of course in some cases this can be a good thing: California and Texas are different states with different heritages and different people—they should be able to enact different laws to represent their citizens.  But in others it can be positively crippling.  Just ask the Founders who watched their newly founded country nearly tear itself apart due to different commercial systems and regulations in the states.

This has been the perpetual struggle of all federal systems throughout history.  One solution is to centralize power in a federal government, and have it enact laws forcing the states to act together.  The other is for the states to voluntarily come together and cooperate on issues of common concern, like commerce.  In 1892, the states chose the second option and created the Uniform Law Commission.2  Thanks in large part to the ULC, today the states have uniform laws on a number of topics, including the Uniform Commercial Code, effectively keeping the federal government at bay and preserving the fragments of federalism.  If not for the foresight of the States in 1892, much of the legal framework that allows for seamless and efficient cooperation between the states in our modern commercial system would never have been developed, or, perhaps even worse, would have been created and preempted by the federal government.

This reservation of certain powers to the states, however, created the possibility that the states could and would enact diverse statues on the same subjects, “leading to confusion and difficulty in areas common to all jurisdictions.”1 The first annual meeting of the ULC was held in Saratoga, New York. Twelve representatives from seven states attended: Delaware, Georgia, Massachusetts, Michigan, New York, New Jersey, and Pennsylvania (Mississippi’s appointed commissioners were unable to attend).3  The states recognized that this was a historic moment.  The report of the first meeting proudly stated that “It is probably not too much to say that this is the most important juristic work undertaken in the United States since the adoption of the Federal Constitution.”

In the more than one hundred years that have elapsed since that time, there has been no official effort to obtain greater harmony of law among the States of the Union; and it is the first time since the debates on the constitution that accredited representatives of the several states have met together to discuss any legal question from a national point of view.4

Every year, without fail, the commissioners from the states come together at the ULC’s annual meeting to draft and vote on legislation to propose to their states, functioning much like an annual Article V convention of states, except that instead of proposing amendments, they propose legislation.  Today the ULC has nearly 350 commissioners representing all 50 states as well as Washington, D.C., Puerto Rico, and the Virgin Islands.

The fact that the states today are hosting annual meetings based on the same set of rules that our Founding Fathers followed over 200 years ago, proves that these rules are not dead, or lost, or ignored as some claim.  To the contrary, they are vibrant, and healthy, and followed to this day.

Since its beginning in 1892, the Uniform Law Commission has proposed over 300 acts to the state legislatures for adoption. Over the course of that time the commissioners have never exceeded their authority nor has there ever been a “runaway” conference that exceeded the authority or mission of the ULC.

To learn more about the ULC, visit their website at www.uniformlaws.org.

The preposterous notion that the states are incapable of holding a meeting today to debate, draft, and propose amendments to the Constitution because it will  “run away” is not only historically baseless, but is completely undercut by the hard work of the ULC over the past 124 years. It is an undeniable fact that the states are fully capable today of appointing highly intelligent and qualified individuals to research, draft, and propose laws.  There is no need to speculate how the states will come together to hold an Article V Convention of States; they are already in the habit of doing so.  There is no need to speculate about the rules for a convention; the same rules our Founders followed centuries ago are still followed today when the states assemble to propose laws through the Uniform Law Commission.