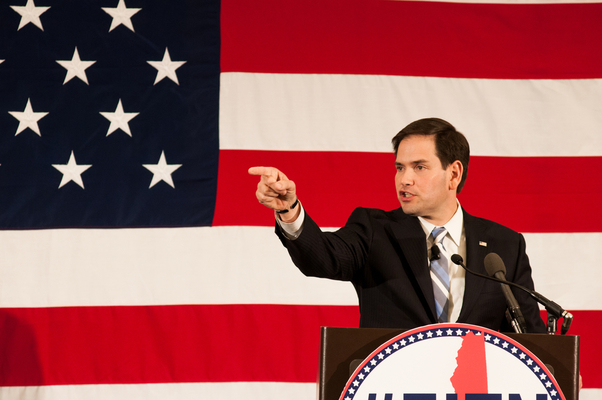 The following excerpt is from an article written by S.A. Miller and published on the Washington Times.

Republican presidential hopeful Sen. Marco Rubio on Monday made one of his most forceful calls yet for states to convene an Article V convention to amend the constitution [...].

The Florida senator beseeched voters to press their state legislatures for a convention of states, saying it was one of the only ways to rein in Washington and solve the looming debt crisis.

“As president, I can promote such a convention, but I cannot make it happen without the American people. That’s why I’m asking for your help today,” he said at a town hall-style meeting in Sarasota, Florida. “To any American worried about the debt we’re leaving our children: Join me in this effort. Press your state representatives to convene a convention of states.”

An Article V convention allows state legislatures to circumvent Congress and initiate a process to amend the constitution. It has become a popular cause among conservatives fed up with inaction from Washington on a host of issues, including seeking amendments for a balanced budget and further limiting federal power over states. [...]

The Convention of States Project has been spearheading the effort and has enlisted nearly a million volunteers and supporters covering all 50 states, according to the group’s website. [...]

In the speech, Mr. Rubio bemoaned that most young voters believe the American dream is dead and the looming debt crisis. He also warned that Democratic front-runner Hillary Clinton’s high-tax, big-government policies would hasten the decline.

“As president, I will put Washington in its place. It will once again stand behind our people, not in their way,” he said.

He continued: “I will repeal and replace Obamacare before it repeals and replaces any more American jobs. I will shred Obama’s job-killing executive orders. I will cap the amount regulations can cost our economy. And I will end Washington’s addiction to wasteful spending. Because by the time our next president takes office, America will already be $20 trillion in debt.”

Want to answer Sen. Rubio's call? The best way is to sign the Convention of States petition. We'll send a copy of your petition directly to your state legislators--no confusing websites to navigate or email addresses to remember. Just fill in the required info and you're done!