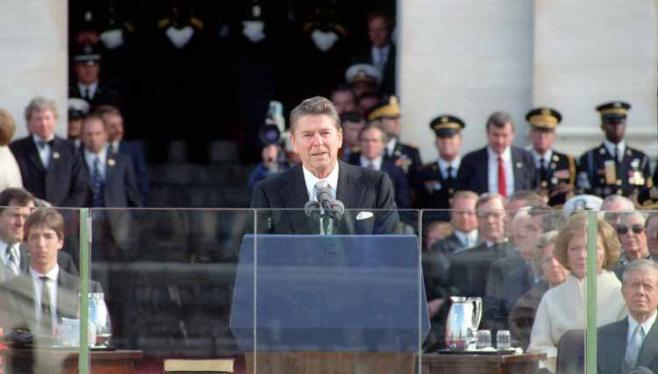 But on January 20, 1981, Ronald Reagan was sworn in as the 40th President of the United States as the new First Lady and millions of Americans looked on. The words of his inaugural address are full of timeless truth… and perhaps are even more powerful today than when they were first uttered.

Like today, the America of 1981 faced economic challenges including unemployment, inflation, a growing deficit, and challenges abroad. Reagan’s speech inspired the American people to believe — not in some vague notion of “hope.” Rather, he inspired us to believe that we could courageously face those problems and solve them. When he said the nation was not, as some claimed, “doomed to an inevitable decline,” it was as if that Carter-induced malaise lost some of its power.

Reagan wasn’t a sunny optimist without also being a stubborn realist. He knew we had real problems and warned of the dangers of “mortgaging our future and our children’s future” with out-of-control spending and deficits. And, in a counter-intuitive statement for a man who’d just taken the most prominent position in the federal government, he said the ballooning size of government was the number-one contributor to the nation’s problems:

If the words of this inaugural address came out of any politician’s mouth today, we’d be shocked. The establishment politicians seem to have embraced the exact ideology against which Reagan warned.

But he was right about that, and he’s right about this: the hope for a brighter American future doesn’t lie in so-called government solutions, but in her people