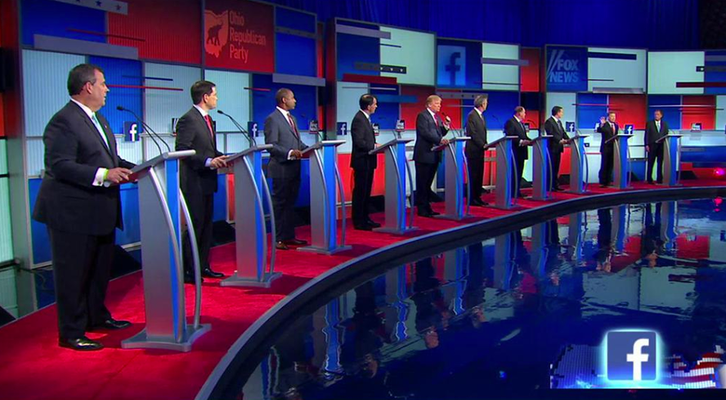 The first GOP debate is in the can, and for the most part there weren't a lot of surprises.

The man with the most to lose, lost the most. Donald Trump made several bad mistakes; he refused to pledge not to run third party, he attacked Meghan Kelly inappropriately and generally came across as rambling and incoherent. He failed to directly answer the difficult questions and generally didn't comport himself well. He was unable to keep up with the pack. He showed himself for what he is...a narcissist, and not a serious contender.

Rand Paul got smacked down in epic fashion by Chris Christie on their Fourth Amendment exchange. And his statement about cutting aid to Israel is a non-starter in the Republican party. His true colors on foreign policy showed through. He may be done.

Jeb Bush came across as basically pale. Nothing to see here...move along. I can't think of anything that stands out that he said. That's not necessarily a bad thing. He came out unscathed, and that's probably going to help him.

Scott Walker came off as affable and competent. He touted his record, and it never hurts. He neither hurt nor helped himself, which is often a great place to be after one of these.

One of my least favorite candidates, Chris Christie, came off strong. He was the winner in a difficult and heated exchange with Rand Paul on the Fourth Amendment. His command of what is needed with the military was impressive. He gained from this debate.

Ben Carson came off as genuine, but struggled to score points with his quiet and slow style. However, he hit it out of the park with his comments on race, and his close was far and away the very best of the night. He redeemed himself there.

Sen. Marco Rubio gained ground with an eloquent performance. His comments about facing off against Hillary, and growing up paycheck to paycheck resonated. His close was Presidential and on target.

John Kasich did an admirable job introducing himself to an electorate that mostly doesn't know him. However, his repeated reference to his Dad the postman was obvious and overdone. The Twittersphere noticed, and he got dinged for it. But his reliance on his record paid dividends and he'll probably get a lift.

Mike Huckabee did very well tonight. His years in front of the camera and as a campaigner paid off. He was smooth, and seriously answered the questions. His delivery of a great joke about Trump / Hillary in his close was masterful.

The biggest winner of the night was Ted Cruz. He came across as Presidential, and consistently conservative. He can pull off fiery rhetoric, and his statements on how he'd deal with ISIS were the top moment on foreign policy. His close was solid, and he's going to get a solid bump from his performance here.

The moment of the debate was the Christie / Paul exchange. It elevated Christie as a serious and capable fighter, and damaged Rand Paul severely. The debate turned at this point and got a lot more serious.