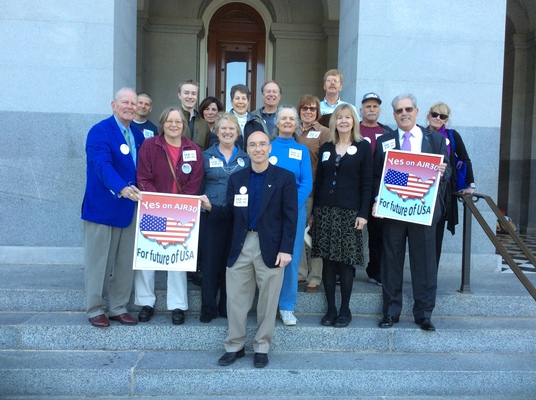 The following article was written by Amy Eddings and originally published on The Lima News.

January is for resolutions. The start of a new spin around the sun by Mother Earth seems to require some sort of new spin in our lives. Lose weight. Be on time. Stop biting fingernails. Save money.

Steve Stechschulte’s resolution is pointed and specific. He wants Ohio to become the ninth state in the nation to pass a resolution calling for a Convention of States for the purpose of proposing amendments to the Constitution.

“That’s what we’re pushing for,” said Stechschulte, who is Ohio’s director for the Convention of States, a project of Citizens for Self-Governance, a group created by Tea Party Patriots co-founder Mark Meckler and constitutional lawyer Michael Farris. “We are hoping to do it before they get their heads buried in the budget.”

Stechschulte isn’t a constitutional lawyer; he’s a software guy for an accounting reconciliation company, a kid from Kalida who grew up with an appreciation for self-initiative.

“It’s a farming community, a lot of self-reliant folks, a place with a sense of community,” he said by phone from his office in Columbus. “There’s Pioneer Days, sports — good basketball when we were there — a community where everybody knew everybody’s name, which provided a sense of looking out for each other.”

It’s how he sees a Convention of States: a democratic process, provided by the Framers of the Constitution, that gives the people the opportunity to look out for each other and help one another avoid abuses of power while promoting self-reliance.

“For a long time, we’ve said, ‘Someone else will take care of it.’ Then you say, ‘Why didn’t you do it the way I wanted you to?’” he said of the average citizen. He said he chose to get involved volunteering for the Constitution of States project because it’s something he believes in, and believes will help the nation.

“The Convention of States allows people to have an emergency brake role, if needed,” he said.

“This debt is becoming at a high enough level that it’s becoming dangerous,” Stechschulte said. “That’s my personal feeling.”

While a Convention of States resolution died on the vine in Ohio’s legislature last year, Stechschulte told a recent meeting of Top of Ohio Patriots in Bellefontaine that he has higher hopes for 2017.

“We thought we had only nine people we could count on,” he said then, of politicians in Columbus who are supportive of a Convention of States resolution. “Turns out we have 21, 24 people.”

And, given Donald Trump’s status quo-upending election to the White House, he believes there will be more.

“The level of awareness and civic understanding has been growing and growing, and it’s maturing,” he said. “If we really get people back in mindset of, we have to be engaged citizens, understand what the government is and what our redress capabilities are, and soberly look at the solutions and use the tools that the Framers gave us, we can impart the will of the people.”

And that is Steve Stechschulte’s resolution for 2017, encouraging people to become engaged citizens and see to it that Ohio’s lawmakers, at least, operate on their behalf on an issue he believes most Ohioans can get behind: amending the Constitution so that it limits federal overreach.

“There’s a solid constitutional basis for what we want to do,” he said of a Convention of States. “It’s not, ‘Let’s grab the pitchforks.’ It was set up by the Framers.”