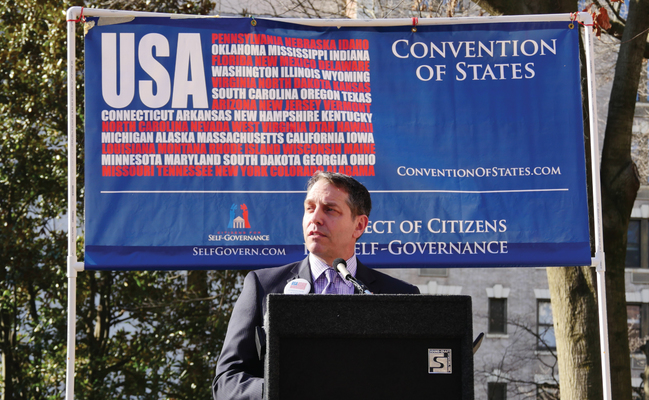 I get a lot of questions about how the Convention of States Project operates, especially since we are a national movement with a growing presence in the grassroots, the media, and state capitols around the country.

What follows are answers to some of the questions our detractors fantasize will expose and damage the Convention of States Project.  Though this information has always been available to everyone, here are the answers to some issues about which people are sometimes curious. (Plus, I threw in some bonus material I thought folks might like to know.)

1.  Corporate Headquarters.  We don't really have one.  We neither need nor want a fancy corporate office.  The majority of us work from our homes, hotels when we're on the road, or wherever we happen to find ourselves with a computer and a cellphone at the moment.  I work from home when I'm not traveling and hanging out with grassroots folks all over the country.  My Executive Vice President and his assistant share an office space with another small business.  Fancy, huh?  Sometimes we get some mail there.  For other matters, our mail comes to post office boxes.  We're frugal and fiscally conservative.  We don't believe a non-profit should spend excessively on overhead.  Donors work hard for their money, and when you're largely run on donor funds from regular folks who are giving $5, $10 and $20 donations, it's important that you operate in a way that shows you understand that.   We never forget.

2.  Our Employees.  Since we don't have a corporate office per se, our employees are spread across the country from coast to coast.  They range from administrative staff, support staff for our volunteers, and Regional Directors, to our General Counsel and our National Legislative Director.  They are from all walks of life, and many of them weren't involved in politics or the non-profit world before.  Some of them were interns for us or students we hired straight out of school.  We have a couple of grads from Patrick Henry College because my co-founder Michael Farris is the founder of the college and has access to some of the brightest young adults in the world. The one thing they all have in common is a desire to serve their fellow citizens in the restoration of liberty.

3.  Prayer.  Many of us pray...regularly.  I know, it's kind of funny to say this, but I get asked about it sometimes because the fact is that in many states the grassroots have set up "Prayer Warrior" teams.  These are folks who regularly pray for legislators, and who pray for fellow activists in need of prayer.  It's a wonderful, spontaneous thing.  We are an organization that accepts everyone, including folks who want to pray for other people.  It's pretty cool and I'm really proud of it.

4.  Grassroots Lobbying. The government regulates the activity of delivering signed petitions and asking grassroots to call or email their own legislator as "grassroots lobbying."  We at COS deliver your signed petitions to state legislators, and we urge citizens to contact their state legislators, so we are constantly engaged in "grassroots lobbying.” Additionally, when our legal or executive teams appear at state legislative committee hearings as expert witnesses on the topic of Conversation of States, we are required to register as lobbyists in order to enter those state legislatures. This is something we find distasteful to do, since "lobbyists" are often part of the problem with what ails this nation.  (And our parents didn’t raise us to be “lobbyists.)  However, since we follow the rule of law, we have to register. The good news is, we lobby  to return power to the people, as in We the People.  We want the government to be accountable to and work on behalf of regular people.  Because it’s best when decisions are made at home, we want decisions to be made by regular citizens or by entities closest to regular citizens…  definitely not by bureaucrats in faraway Washington, D.C.

5.  Volunteers.  We've got an army of them, and the truth is, they are the ones who make this movement tick.  They are the blood, sweat, and tears.  They are the patriots, the fighters for liberty, and the real heroes.  Every day we thank God for the multitudes of grassroots volunteers in every state in the nation.

6.  The rumors about the army we’re building.  Yeah...we’re forming an army…an army of activists that is.  And we’re really proud of them.  Many of our activists are veterans.  And many of them are part of our Veterans for COS.  Many of these veterans were leaders in their service branch, and they are continuing to honor their oath to defend the Constitution.  But we don’t just have veterans, the activists voluntarily gathering around COS represent a broad cross-section of America.   We have volunteers from every state legislative district in America. We have had sixteen year olds testify as well as eighty year olds.

7. Self-governance.  We want to practice as well as promote our American heritage of self-governance.  That is the the thing that makes America an exception.  It is the thing de Tocqueville noticed about America.  We don’t need an authority to tell us to do things, we figure it out on our own.

8.  Zealotry.  Yes, we are indeed zealots for the Convention of States cause.  We get accused of this all the time, so I just want to put it in writing.  It's true.  We believe it's a binary choice.  You either like the power in D.C., or you want it back home, in your state.  If you support the idea of a Convention of States, then you want the power back home.  If not...well, we think it's weird, but apparently, you like the people living Washington, D.C.making your decisions for you.

9.  Simplicity.  We’re simple, and we like it that way.  There is one single question that is addressed by the Convention of States Project.  It’s what we’re all about.  The question is, “Who Decides?”  The answer is, just like the Founders, “We the People.”  It’s that simple.

If you believe that folks in the states should be deciding most issues for themselves, instead of ceding important decisions to disconnected elitists in Washington, DC, then welcome to the club, and welcome to the Convention of States Project family of patriots.  On the other hand, if you believe that a ruling elite in DC should be deciding important issues for the rest of us…well… you might not be happy with the growing momentum of self-governance that’s taking this nation by storm.