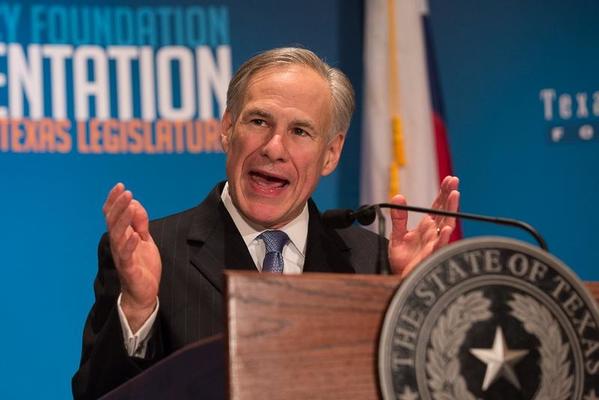 The following article was written by Barbara Hollingsworth and originally published on CNS News.

Conservative activists hoping to convince 30 more state legislatures to pass legislation to convene a Convention of States to rein-in the federal government praised Gov. Greg Abbott’s "Texas Plan" to amend the U.S. Constitution, which he unveiled during a speech last Friday.

Mark Meckler, president of Citizens for Self-Governance, the parent organization of the Convention of States Project, noted that Abbott joined former Republican Governors Bobby Jindal, Mike Huckabee and Sarah Palin in calling for such a convention at a time when anti-Washington sentiment is running high in America, as evidenced by the surge of support for “outsider” candidates like Donald Trump.

“This is not a partisan fight. The question asked by a Convention of States is much more fundamental: Who decides?” Meckler told CNSNews.com.

“I’ve traveled to 34 states in the last 12 months and people say they want decisions to be made as locally as possible. They don’t like the federal government deciding,” he said, adding that “I was actually at that meeting, but I left before Gov. Abbott’s speech, so you can see what a surprise it was.”

“It was a surprise,” agreed project head Michael Farris. “We didn’t expect it, but we’re glad he did it. His nine proposed amendments exactly align with ours.”

“Governors officially don’t have a vote, but they have a major leadership opportunity,” Farris continued. “This was a very important step forward. I’d even call it a breakthrough.”

“More and more the national discussion is centered on this [issue], but we haven’t heard much from the many presidential candidates on how to fix it,” Farris said. “This is the solution to the problem, which is long-term and systemic.”

“If we really want to fix the problems we face today, we need to fix the fractured foundation of this country,” Abbott said in his speech to the Texas Public Policy Foundation, calling for an Article V Convention of States to rein-in “an overreaching federal government” that has exceeded its constitutional authority.

“Our government was founded on the rule of law, not the caprice of men,” he said. “That rule of law flows from our Constitution. The Constitution is our foundation that is now so often ignored that the Founders would hardly even recognize it.”

Under Article V of the U.S. Constitution, two-thirds of the 50 state legislatures (34) can call a convention to propose constitutional amendments that limit the scope and jurisdiction of the federal government. The idea was popularized by radio talk show host Mark Levin in his best-selling book, The Liberty Amendments.

The legislatures of four states – Alabama, Alaska, Florida and Georgia – have already passed joint resolutions calling for a Convention of States. Similar legislation will be introduced in 34 other state legislatures this year, Meckler said.

Last January, the House of Representatives enacted a new rule proposed by Rep. Steve Stivers (R-OH) that creates a formal system for documenting Article V petitions. The latest application was submitted by Kansas on January 6th.

Abbott pointed to President Obama’s unilateral gun control as one of the “cracks in our constitutional foundation.”

"Obama took action unilaterally that threatens Second Amendment rights even though the entire point of the Bill of Rights was to protect Americans from invasions of their liberties by the caprice of men just like that,” said Abbott, who bragged that he “sued Barack Obama 31 times” as Texas attorney general.

“Congress is no better,” Abbott went on, noting that “each branch of government has strayed from its intended role.” He called the Supreme Court a “co-conspirator in the abandonment of the United States Constitution.”

Abbott said his 90-page proposal would “put teeth into the Tenth Amendment” by specifically giving states authority to “sue the federal government when it assumes powers not delegated it by the Constitution.”

Some of the Texas Plan’s other proposed constitutional amendments would allow a two-thirds majority of the states to override federal laws, regulations and even Supreme Court decisions; require a balanced federal budget; and significantly reduce federal power by prohibiting unelected bureaucrats from creating laws or preempting existing state laws.

“The only true downside comes from doing nothing and allowing the federal government to continue ignoring the very document that created it,” the plan concludes.