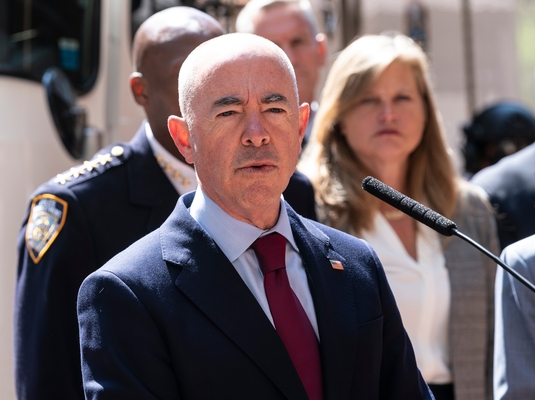 First, here are a few questions for you.

Did you ask your US Representative to release control of the border?
Did you ask your US Senators to start a Disinformation Governance Board?
Did your congressmen ask you if you wanted these government actions?
If you answered “no” to these questions, then why is our federal government pursuing these policies?

Like many appointees of the current administration, Alejandro Mayorkas was a deep state hack inside the Obama Administration whose career and accompanying failed policies were resurrected under Biden, now as the Secretary of Homeland Security.

US Customs and Border Patrol continue to report nearly unbelievable numbers of illegal immigrants flooding our borders as a result of the changes to border policies under the Biden Administration. Migrant encounters reached their highest level on record in 2021, yet Secretary Mayorkas continues to claim the administration has “effectively managed” the border.

The behavior of Secretary Mayorkas is so egregious that top GOP members have penned a letter directly to Mayorkas, calling him unsuitable for public office.The letter further claims that Mayorkas continues to ignore his Constitutional responsibilities of protecting National Security by ignoring state border officials and his “repeated rejection” of Migrant Protection Protocols endanger American’s safety.

This is a direct assault on the First Amendment. Period.

If past history of the Left is any indicator, this is exactly the type of policy we should fear as Americans. Mayorkas has appointed Nina Jankowicz, a known peddler of nonsense like “Hunter’s laptop is Russia disinformation” and the Russia collusion hoax. So this disinformation specialist is now in charge of shredding Americans First Amendment rights. Single handed. C’mon man.

It’s time we recognize the out of control policies and politicians emanating from the Swamp. We must stand up for our Constitutional rights. We citizens have the right to petition our Congressmen, our Representatives and Senators, but when Congress repeatedly fails us, we are duty-bound to use the power of  Article V of the US Constitution to reclaim our Constitution as founded. Check out the website and sign the petition and then share it with a friend!