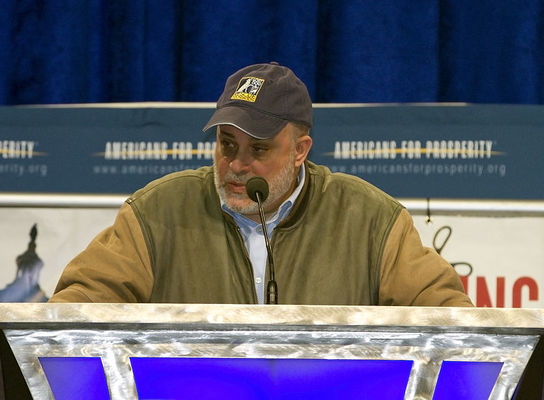 The following excerpt is from an article published on Breitbart.com, covering Mark Levin's address to state legislators at the recent American Legislative Exchange Council conference. Levin spoke at a breakfast event hosted by Citizens for Self-Governance and the Convention of States Project.

Conservative talkradio host Mark Levin made news Thursday when he addressed the annual conference of the American Legislative Exchange Council (ALEC), a "non-partisan membership association of state lawmakers," and it wasn't just because he reiterated his call for an Article V "Convention of the States" to propose new amendments to the Constitution.

Levin's call for an Article V Convention of the States has been well known since the publication of his best-selling book, The Liberty Amendments, more than a year ago.

On Thursday, Levin framed the Article V Convention of the States as the beginning of the process in which state legislators can reassert their constitutional power and become, in effect, the kind of check on the out-of-control federal government the framers expected the three branches of federal government they created in the Constitution would be on each other.

"Take your power back," Levin told the enthusiastic crowd of state legislators from around the country.

Critics who claim an Article V Convention could become a "Runaway Constitutional Convention" miss the point entirely, Levin said. Critics think such a convention would have no impact, as the federal government is ignoring the Constitution already and would have little reason to observe any amendments, subsequently ratified by the states, that emerged from the Convention of the States.

"So if you ask me what makes you think the federal government will follow amendments to the Constitution if it won't follow the Constitution today, then you don't understand this process," Levin told the audience.

"The goal is to limit the entrenchment of Washington's ruling class," he stated.

"If you're going to go through this process, don't get myopic. Don't get caught up in one issue," Levin added. "This is a structural, systemic issue. We're trying to restore the republic and save what's left of the Constitution."

Watch the entirety of Mark's speech below: