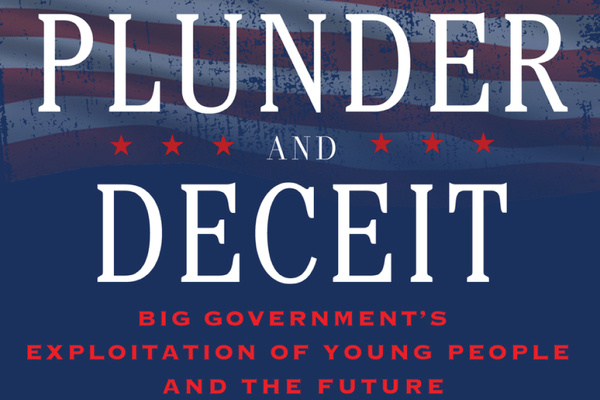 I'm very pleased to announce the international release of Mark Levin's new book Plunder and Deceit! Mark has been instrumental to the success of the Convention of States movement, and we want to let our supports know about his wonderful new book, which you can order here.

I published a review of Plunder and Deceit last month to give you an idea of what you can expect. We've re-published it below:

I just finished a galley copy of Mark Levin's new book, Plunder and Deceit; Big Government's Exploitation of Young People and the Future. He's done it again. It's an easy and compelling read, written specifically for what he calls "The Rising Generation."  It's a call to younger Americans to wake up and face reality.

He goes through many of the major challenges facing America today:  The Debt, Social Security, Medicare and Obamacare, Education, Immigration, Environment, Minimum Wage, National Security, and the Constitution.

The final chapter is a compelling call for a New Civil Rights Movement.

"What is required is a New Civil Rights Movement -- not of the sort that exists today, which has been co-opted by statists, is often led by hucksters, and serves as a surrogate and advocate for centralized government and its pervasive agenda. But a truly new civil rights movement organized around fostering liberty and prosperity for younger people and future generations and against their continued exploitation."

Mark Levin has a history of laying the intellectual foundation for new segments of the liberty movement.  Liberty and Tyranny helped lay the framework for the tea party movement. Liberty Amendments set the stage for the Convention of States movement. Both are now integral components in the fight for liberty in America.

Today, with Plunder and Deceit, Mark Levin sounds a clarion call for a New Civil Rights Movement to preserve liberty for a rising generation and for future generations whose future is at stake. I believe he is about to launch the latest battle in the war for the philosophical heart of the nation.

I highly suggest ordering the book. It's a fast and enjoyable read. If you have kids or grand kids between 13-35, they should really read it. It will speak directly to them. Buy at least a dozen and pass them out. The future of liberty hangs in the balance.

You can check out Plunder and Deceit by ordering your copy here.