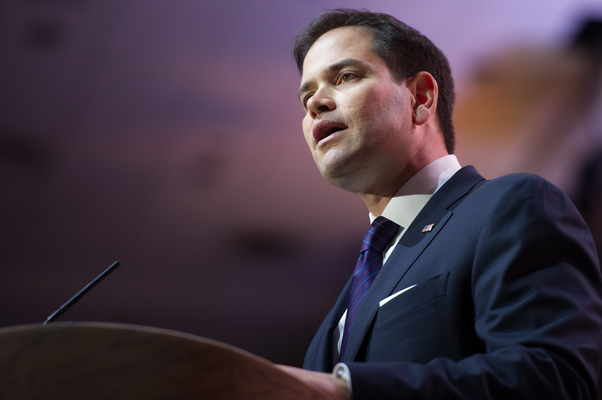 The following was written by Marco Rubio and originally published on The Blaze.

There has never been a country like America — founded on the principle that our rights come from God, not from government. For decades, however, our core principles have been assaulted by the courts, by Washington politicians in both parties, by unelected bureaucrats in the Environmental Protection Agency and Internal Revenue Service and other agencies, and most of all, by our current president. The boundaries of our Constitution must be reinstated in order to truly restore limited government.

That’s why on my first day in office, I will promote the Convention of States Project.

A Convention of States was designed by the framers and placed in Article Five of the Constitution precisely because they knew that Washington was unlikely to choose to restrain itself. Rather than rely on Congress to limit federal power, the framers trusted the people. The people, through their elected state representatives, can amend the Constitution. Thirty-four states can call for a convention where delegates can propose and discuss new amendments to the Constitution. Any amendment would need the support of 38 states to become law.

In calling for the convention, the states must limit the scope of what will be discussed, ensuring that our constitutional rights are preserved and that the radical left cannot hijack the process. To be clear, I do not support any changes to the Constitution that grow government and shrink our rights. But I do support a Convention of States to propose amendments that force fiscal responsibility in the form of a balanced budget amendment, limit the power and jurisdiction of the federal government, and hold Washington accountable by imposing term limits.

Any one of these reforms will be helpful if ultimately enacted, but it will take a broader approach to effectively restrain Washington, D.C. and return us to the limited government envisioned by our founders.

That’s why, in addition to the Convention of States, I will restore the presidency to its constitutional bounds, and I will curtail further erosion of the constitutional limitations on federal power by appointing only judges who will interpret the Constitution, not those who will remake it.

As president, I will take the solemn oath to preserve, protect, and defend the Constitution – and unlike the current president, I will uphold that oath. Our Founders made a commitment to individual liberty, to honor the fact that we are all equal in the eyes of our Creator, to free enterprise and human flourishing, and to constitutional government. For over two centuries, America has been an inspiration to the world and a place where millions come in search of a better life.

Yet for decades, the radical left has sought to redefine our government, our economy, and our country. And they’ve achieved their greatest successes in the last seven years.

Frustration has been building for a long time, but the Obama administration has accelerated the process of ordinary citizens being left voiceless, believers in traditional values being marginalized, states becoming puppets of Washington, and every American being subjected to the dictates of unelected bureaucrats. A lawless administration, activist courts, and an out-of-touch Congress have repeatedly undermined the Constitution and the system of limited government that our Founders designed.

Government works best when it is limited. Hampered by $1 trillion of defense cuts, our federal government is failing miserably at its first and most important responsibility: to keep our nation safe. Instead, the government has dramatically overstepped its bounds in areas where it has no legitimate role. Look no further than Obamacare’s individual mandate or Common Core to see the results.

For government to work the way it should, and for the 21st century to be a New American Century, we must renew our commitment to restore and uphold our founding principles. That means returning power to the states, reversing Barack Obama’s illegal executive orders, shrinking and reforming our job-killing regulatory regime, and standing up for life and for liberty.

America is an exceptional nation because it is made up of exceptional people. It is in the people that the American ideas of equality and liberty have been carried forward from generation to generation. We are our own greatest resource and the greatest obstacle to unchecked big government. And we, the citizens, must engage in the work to take our rightful power back from Washington, D.C.

That’s why I put my trust in the people, not Washington, in the critical effort to restore Constitutional, limited government. The Convention of States Project is a genuine grassroots movement to achieve that goal, and one that I am proud to be a part of.